NO Rezoning of Flushing!

MinKwon Center is an member of Flushing for Equitable Development & Urban Planning (FED UP), a new coalition of community-based organizations and concerned community members formed in January 2020 to oppose the current rezoning efforts of the Special Flushing Waterfront District (SFWD). In December 2019, a new ULURP (Uniform Land Use Review Procedure) process began to rezone downtown Flushing and the Flushing waterfront and allow construction of 1,725 luxury condos and offices, despite serious environmental, social, and economic concerns from the Flushing community, especially from low-income, youth, senior, and limited English proficient communities of color.

Flushing rezoning is expected to bring:

The City Planning Commission meets regularly to hold hearings and vote on applications.

Watch a live stream of the meeting online here.

Draft agendas will be posted at the Department of City Planning. 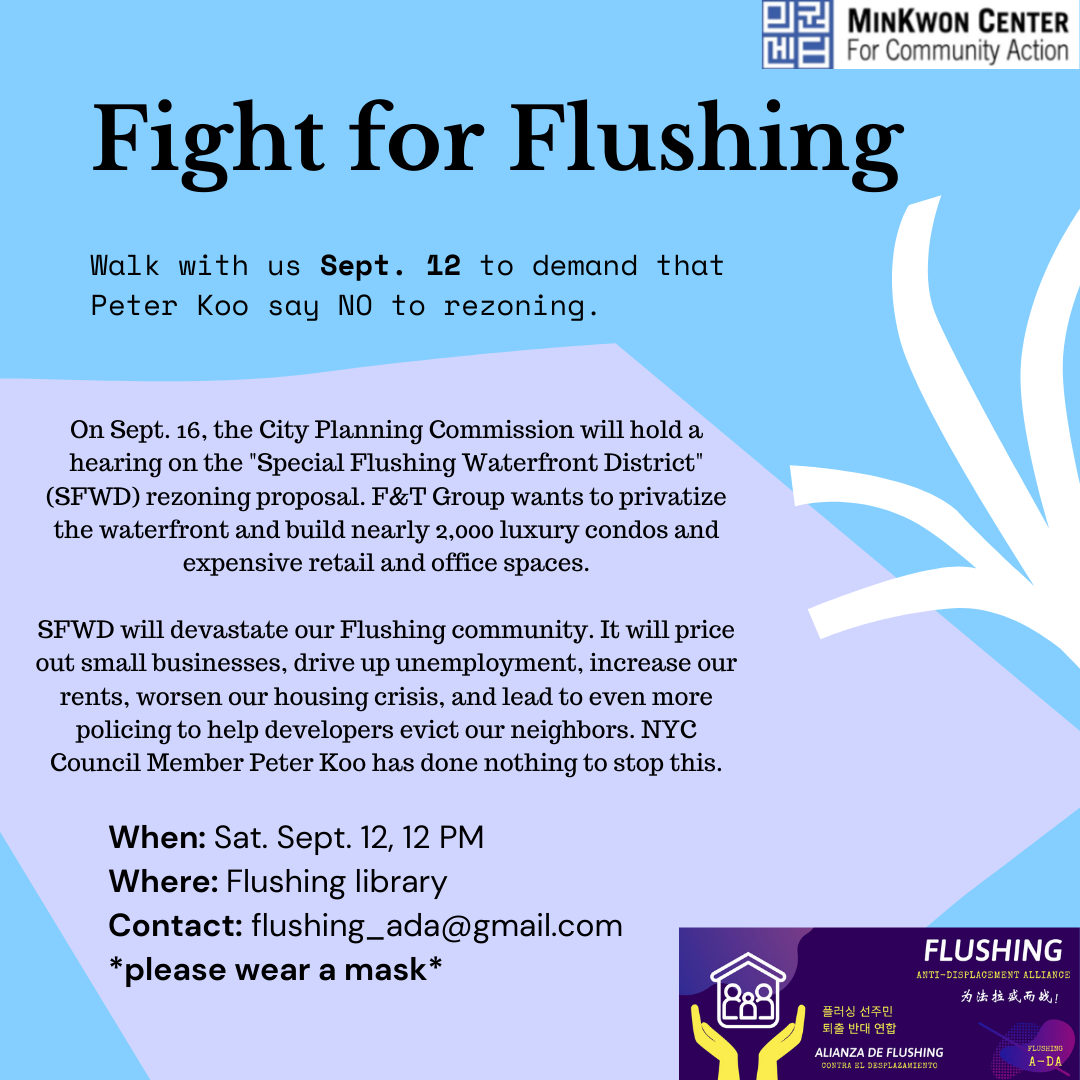 ULURP has restarted despite COVID-19 and a statewide housing crisis.

On Sept. 16, after postponing all rezoning processes by several months due to the pandemic, the City Planning Commission will hold a hearing on the "Special Flushing Waterfront District" (SFWD) rezoning proposal. F&T Group wants to privatize the waterfront and build nearly 2,000 luxury condos and expensive retail and office spaces.

SFWD will devastate our Flushing community. It will price out small businesses, drive up unemployment, increase our rents, worsen our housing crisis, and lead to even more policing to help developers evict our neighbors. NYC Council Member Peter Koo has done nothing to stop this. Walk with us this Saturday to demand Peter Koo say NO to SFWD once and for all.

UPDATE: (3/19/2020): Due to the COVID-19 pandemic, NYC Mayor Bill de Blasio issued an executive order on March 16, 2020 freezing all ULURP processes and applications, including the SFWD rezoning proposal. All scheduled hearings and votes by the City and any in-person meetings, protests, and direct actions by FED UP are POSTPONED.

As FED UP takes this moment as an opportunity to revisit and strengthen our mission, vision, and strategies, we encourage Flushing residents and allies to continue submitting their public comments against SFWD to the NYC City Planning Committiee (CPC). You can submit a public comment online here.

VICTORY: despite the $$$ & influence luxury developers have used to push through #FlushingRezoning, @QueensBP2020 has recommended AGAINST the proposal. This is a major win for our neighbors, especially as #COVID19 is putting us at greater risk of eviction and instability. pic.twitter.com/AMus40Xhrw 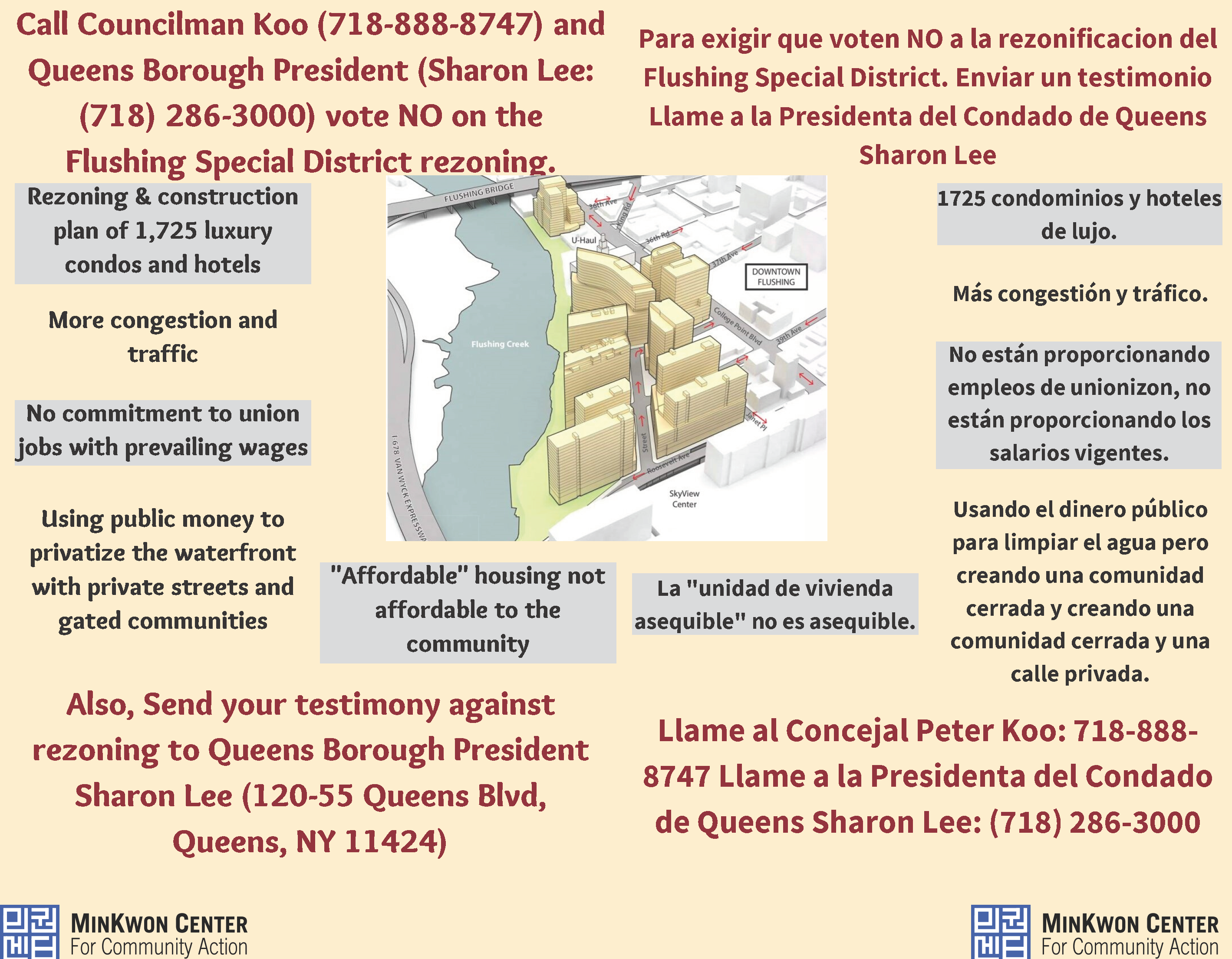 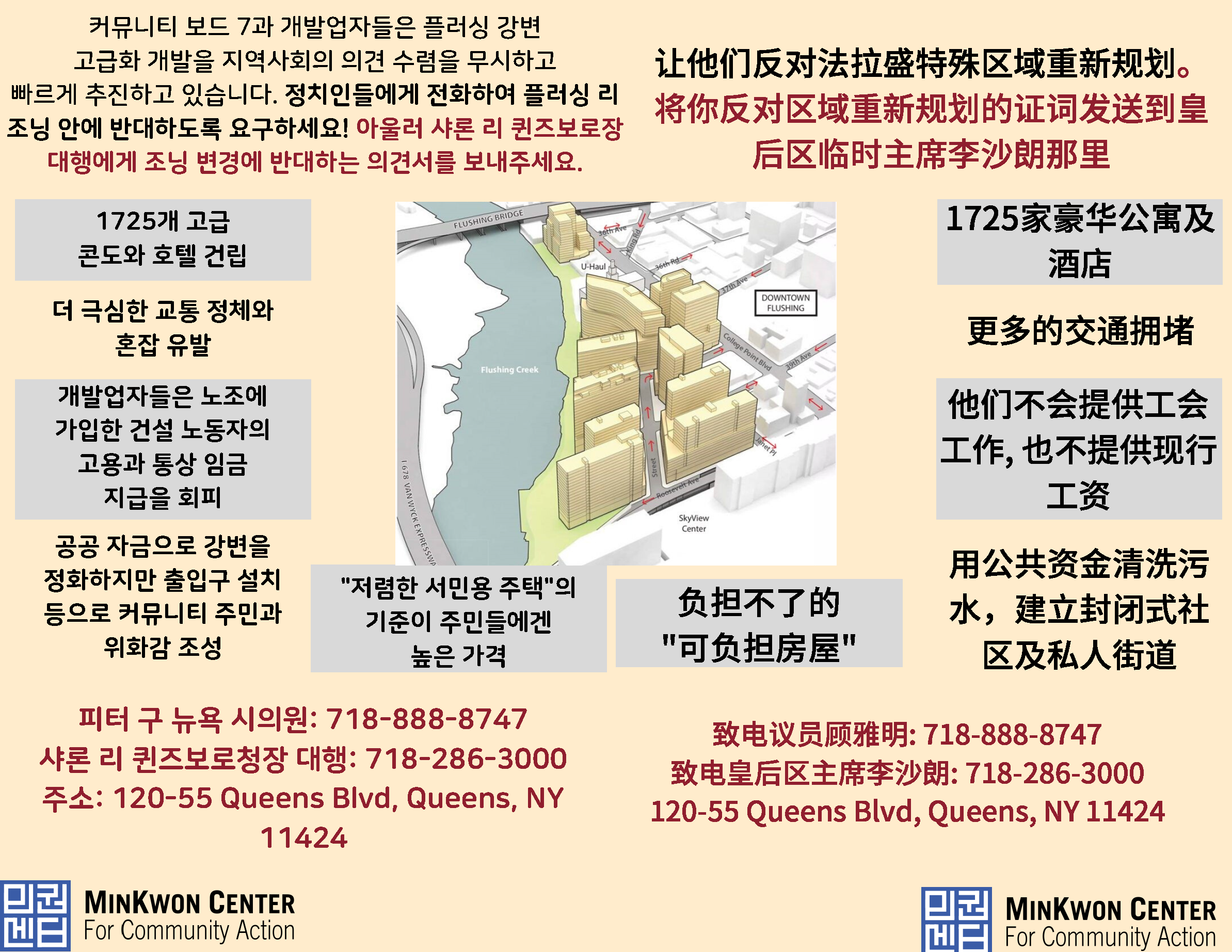 Thank you for attending the Queens Borough President public hearing on Flushing rezoning on February 20.

On Thursday, February 20, 2020, members of the Flushing for Equitable Development & Urban Planning (FED UP) Coalition appeared at the Land Use Public Hearing at Queens Borough Hall to call on Acting Queens Borough President Sharon Lee to formally oppose the Special Flushing Waterfront District (SFWD). Following the Community Board 7 public hearing on February 10, the public hearing chaired by the Borough President was the next phase of the ULURP (Uniform Land Use Review Procedure) process, and an advisory vote from the Borough President is expected within 30 days from the CB7 vote that occurred on February 10.

Prior to the public hearing, members and allies of the FED UP coalition congregated on the steps of Queens Borough Hall for a press conference to denounce the absence of transparency, community accountability, and democratic decision-making in the rezoning process, and to call on Borough President Lee to side with the Flushing community over the interests of the developers. Speakers included State Assemblyman Ron Kim (D-AD 40), City Councilman Costa Constantinides (D-CD 22), Seonae Byeon and Tina Han from the MinKwon Center for Community Action, John Choe from the Greater Flushing Chamber of Commerce, Cody Herrmann from the Guardians of Flushing Bay, community organizer Mel Gagarin, and Donal Cogdell from Hope Astoria Church. 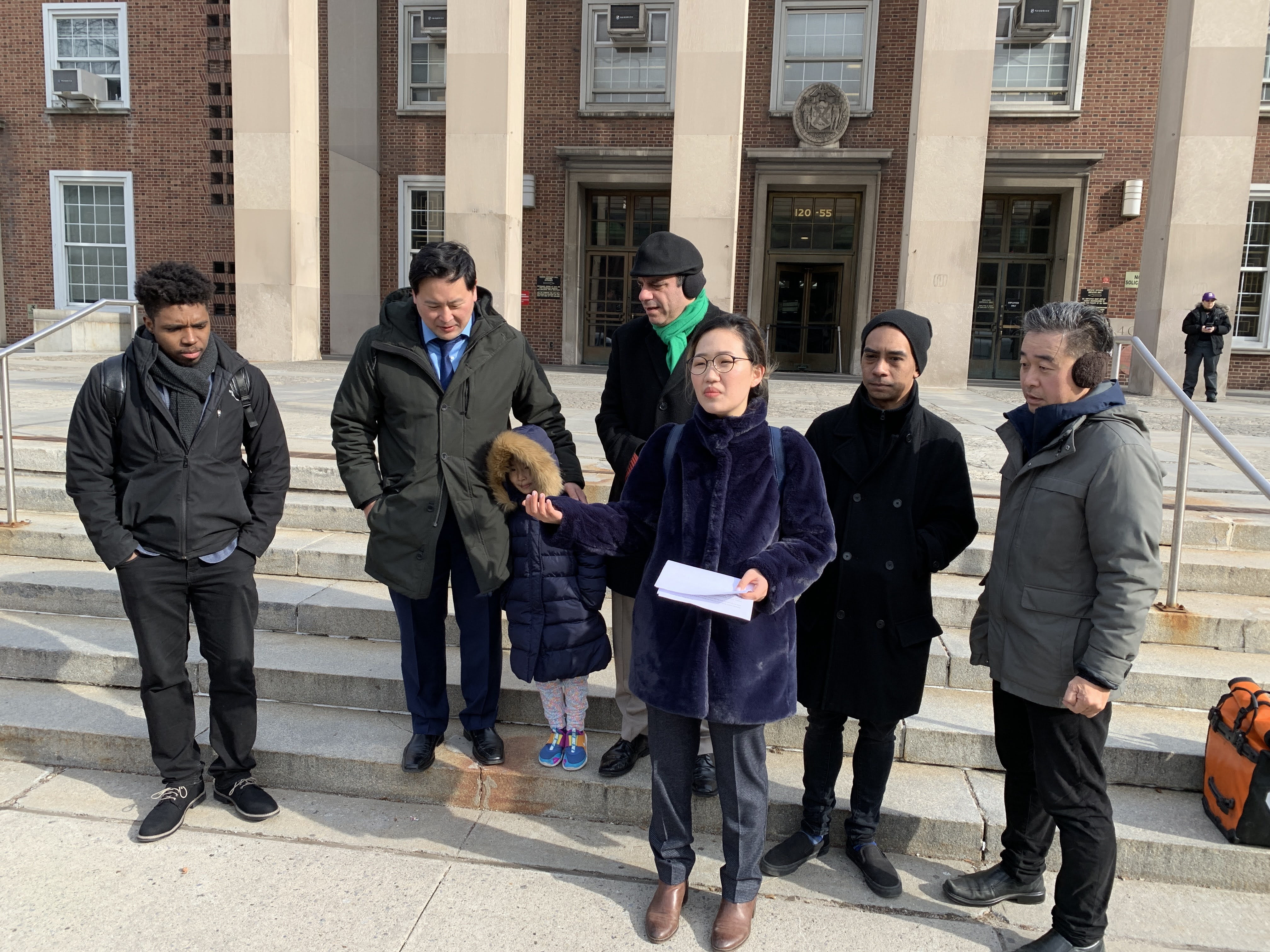 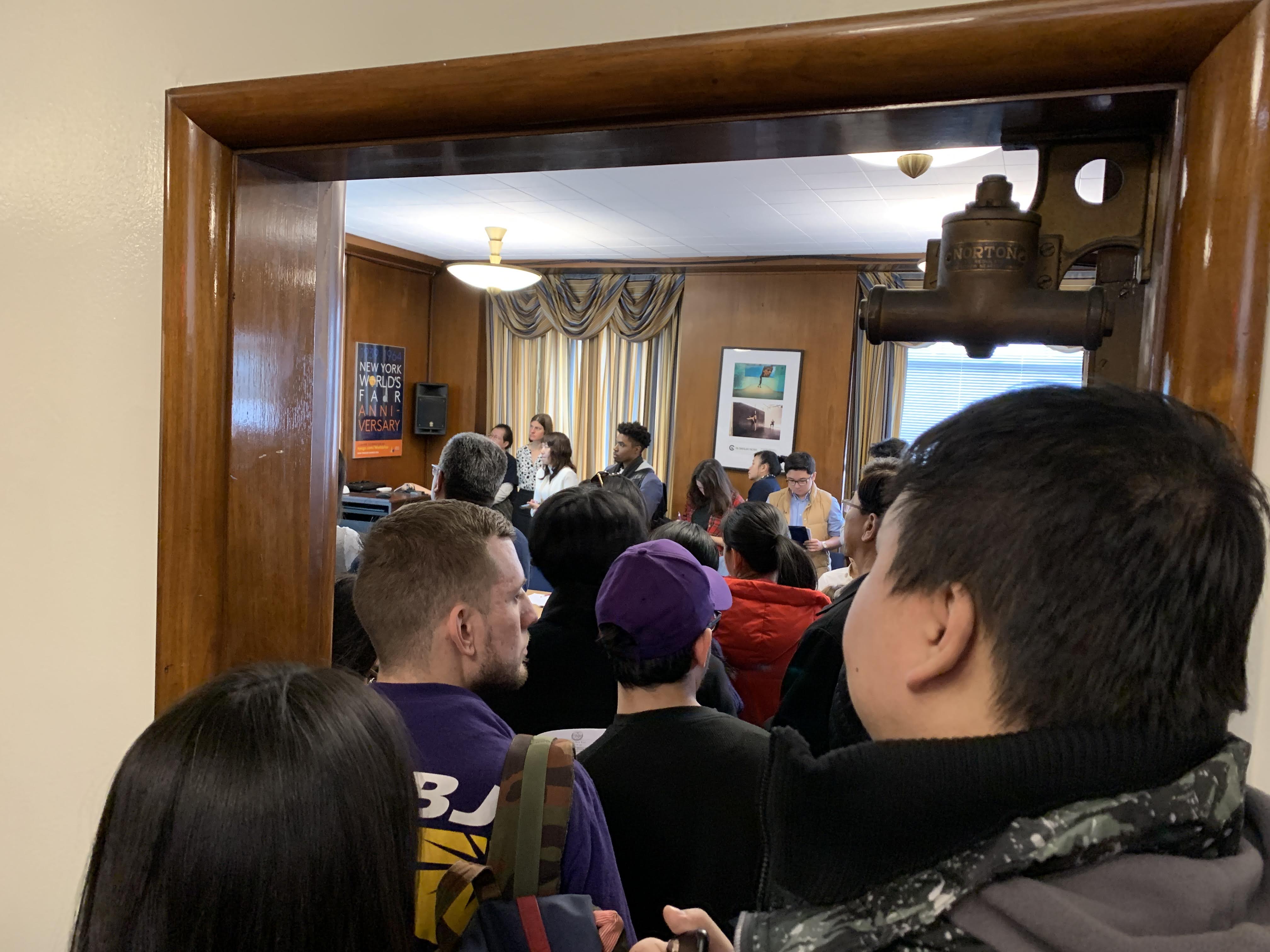 Thank you for attending the Queens Community Board 7 public hearing and vote.

On Monday, February 10, 2020, hundreds of community members braced the rain and turned out to participate in the Public Hearing and Vote on #FlushingRezoning by Queens Community Board 7. It was a long night as the hearing lasted over four hours, and CB7 finally voted 30-8 to approve Flushing rezoning and forward the land-use process to the Queens Borough President, in defiance of the community's needs and interests. Many CB7 members who voted in favor were silent throughout the hearing.

While we are deeply disappointed in the results of the vote, we are immensely proud of the community who showed up and sounded our collective demands for real affordable housing, community centers, schools, libraries, robust social services, prevailing wage jobs, and environmental restoration. We are proud of the work we did in educating and mobilizing the community, and how we took care of each other in the face of barriers that CB7 enforced to prevent full and fair participation by the community. As we continue to recollect what happened on Monday and develop our plan going forward, we shouldn't forget the fact that the people have the power to fight back against injustice, and the power to fight for the solutions they need to thrive.

On Monday, Feb. 10, hundreds of community members braced the rain and turned out to participate in the Public Hearing and Vote on #FlushingRezoning by Queens Community Board 7. It was a long night as the hearing lasted over four hours, and as we and the new Flushing for Equitable Development & Urban Planning (FED UP) coalition are strategizing our next steps, we're offering a reflection on the night and a response to CB7's vote. �� Before the hearing, MinKwon youth held a rally outside Flushing Commons, a new building developed by F&T group, one of several developers behind the current rezoning plan. We rallied to call out how Flushing Commons was heralded as a solution for affordable housing and public greenspace in Flushing -- promises that were NOT kept when the building opened. Chanting in five languages and clanging traditional Korean instruments, the youth held a march and met up with 32BJ SEIU, FED UP, and other community members at a rally outside the site of the hearing. �� Before the start of the hearing, there was heavy NYPD presence that delayed or limited access to community members who arrived late, as the room was quickly reaching capacity. CB7 members and developers all had reserved seats for the hearing, while everyone else was left to stand or sit on the ground. The hearing started with a presentation to include amendments that was led by developers and the Land-Use Committee. CB7 did not give a time limit to the developer-led presentation, but confirmed that they would cut down speaking time for each community member who signed up for public comment from 3 minutes to 1 minute. �� As the hearing reached its second hour, deep frustration was mounting in the audience. There was no end in sight for the presentation. The presentation was largely redundant, as FED UP members pointed out how many of the slides and talking points were already presented in past committee meetings. Some people who signed up for public comment had to leave without sharing their comment, at a hearing that was supposedly for the public. Others were concerned that a vote would happen without public comment at all. [continued in comments]

Rezoning is not a new project, and is not isolated to Flushing or Queens. It has been used as an ongoing strategy by luxury developers to gentrify New York City and displace long-standing, vibrant communities for decades. Below is a presentation on a brief timeline on Flushing rezoning, from the Bloomberg to the de Blasio administration, and what MinKwon and our neighbors have already done in response.

A Year After Amazon Rejection, Both Sides of Battle Applying Lessons Learned by Christine Chung, The City. February 13, 2020.

As NYC suspends land use and rezoning actions, some officials want to also ban construction by Devin Gannon, 6sqft. March 17, 2020.