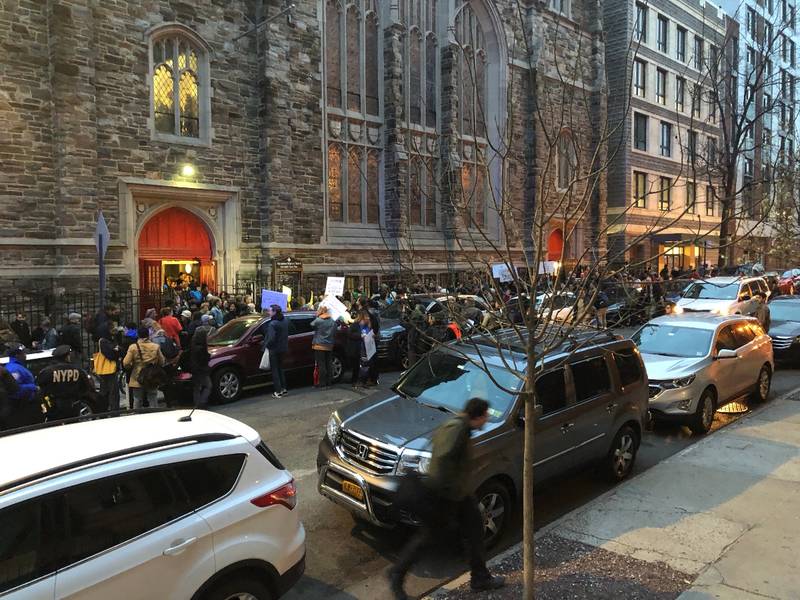 Held within the historic Abyssinian Baptist Church on 132 W 138th Street in Harlem, the Moral March and Rally for Housing Justice was on full-tilt before the first speaker even took the podium. Chants of, "The tenants united will never be defeated" rained down from the upper levels of the historic church.

The atmosphere was electric.

All were there to support a broad package of bills--the Universal Rent Control Platform--now being considered in Albany that, in effect, would strengthen the City's existing rent laws and extend many of the same protections to communities across the state for the first time. The speakers didn't hold back in both supporting the bills, and excoriating the real estate interests aligned against them.

"It is now crucial that each one of us recommit ourselves to go back to Albany, to make sure the newly elected majority of the Democratic Senate can work with the brothers and sisters," Johnson said. "Are we going to be a city where only the richest can live? Where you have to make a six or seven figure salary in order to survive in New York City?"

"I want to tell you why I support universal rent control," said Stringer. It means that we protect the people that build our city and it means we allow the next generation of New Yorkers to live here."

According to information provided by Progressive Cities, "Half of all New Yorkers in the state are renters, but instead of protecting tenants, the current rent regulation laws do more to help a small number of New Yorkers and corporations that profit from owning rental properties."

Preferential rent, vacancy decontrol, major capital improvements and rent control were amongst the issues focused on by the speakers last night in relation to getting tenants the protection they need.

"I don't give a damn about your second home in Midtown! What I do care about are the people that are homeless on the streets," exclaimed Williams. Inspiring one of the largest cheers of the night.

A march was held following the commencement of the rally from the Church to the Adam Clayton Powell Jr. State Office Building to hold a vigil for those who been evicted because of weak rent laws.

Here are the nine bills that make up the Universal Rent Control Platform:

-Reform "Preferential Rent" (S2845/A4349) (Krueger/Cymbrowitz): Requires that preferential rent leases last for the duration of the tenancy.
-End "Vacancy Decontrol" (S2591/A1198) (Stewart-Cousins/Rosenthal) : Repeals vacancy decontrol and re-regulates deregulated apartments that rent for less under $5,000 in NYC and $3,5000 in suburbs.
-Eliminate the "Vacancy Bonus" (S185/A2351) (Serrano/Pichardo): Eliminates the 20% bonus on "legal rent" landlords may add to legal rent when an apartment changes hands.
-Eliminate Rent Hikes Caused by Major Capital Improvements (S3693/A6322) (Gianaris/Barnwell): Eliminates landlords' ability to pass the cost of necessary building rapairs onto renters.
-Stop Harassment and Deregulation Caused by Individual Apartment Improvement Increases (S3770/A06465) (Kavanagh/Richardson): When apartments are vacant, landlords often make cosmetic repairs in order to raise the rent and reach the deregulation threshold. This will would eliminate that.
-Reform the Four Year Rule (S4169/A5251) (Myrie/Dinowitz): While tenants in rent stabilized apartments are able to challenge rent increases, thanks to the "four year rule," they are limited in their ability to fight older, but often fraudulent, "legal" rents.
-Expand the Emergency Tenant Protection Act (S5040/A7046) (Breslin/Cahill): Only New York City and the surrounding counties can opt into rent regulation. This is not fair. Localities should decide for themselves whether or not they want to opt into a system to protect tenants. This bill gives all places in New York State the option to decide themselves.
-Good Cause Eviction (S2892/A5030) (Salazar/Hunter): Gives every tenant in New York State the right to a renewal lease with fair terms for the landlord. Tenants may still be evicted for "good cause."
-Rent Control Relief (S299/A167) (Benjamin/Rosenthal): Brings "rent control" increases in line with "rent stabilization" increases.