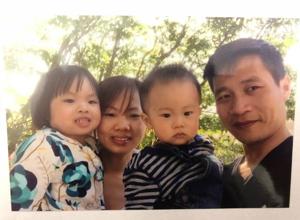 Flushing father Xiuqing You, seen here with his wife and kids, scored a major win in his deportation case on Wednesday afternoon, with a judge staying his deportation order and ordering his immediate release from Trump administration custody.

Flushing man Xiuqing You spent recent weeks languishing in U.S. Immigrations and Customs Enforcement custody at a facility in New Jersey, separated from his family.

But on Wednesday afternoon, a federal judge stayed his deportation order and ordered he be immediately released from government custody.

The Legal Aid Society, which had been representing the 39-year-old Chinese national with his attorney Yee Ling Poon, announced that an emergency stay motion temporarily granting his deportation had been won. The decision is pending resolution of You’s petition for habeas corpus.

“Today’s ruling is a sharp rebuke of ICE’s cruel and fanatical crusade to circumvent due process with the goal of tearing families apart,” Gregory Copeland, supervising attorney in The Legal Aid Society’s immigration law unit, said in a prepared statement. “Mr. You has lived without incident in this country for years, establishing a family and building a successful small business.”

You doesn’t have a criminal history. And his case has generated an outpouring of public sympathy for him, his wife Yu Mei Chen and their two kids, who are 4 and 6 years old, as well as outrage at the Trump administration.

U.S. Immigration and Customs Enforcement agents arrested him on May 23, at a meeting he and Poon thought would just be a green card interview.

You came to the United States in January 2000 lacking a valid entry document, according to ICE.

A judge ordered his deportation in December of that year; he filed an appeal of the decision and it was dismissed by the Board of Immigration Appeal within weeks.

According to published reports, You filed an asylum claim in 2002, saying his Catholic faith could make him vulnerable to persecution back in China. The claim was denied; a judge issued an order of removal later in the same year.

And in May 2008, ICE said, You filed a motion to reopen his case, but it was denied that September.

You and his wife, who is an American citizen, run a nail salon in Connecticut.

Poon told the Chronicle that his plight has  been extremely difficult on his family. “They are in pretty bad shape,” she said in a Tuesday interview.

The Chronicle could not get a comment from the attorney since news broke Wednesday afternoon, though she said Tuesday that another motion may be filed to reopen You’s asylum case.

In Queens and elsewhere in the city, many criticized the federal government over the case and calling You’s plight unjust.

The controversy over his case takes places as the Trump administration comes under fire for separating children from their unauthorized immigrant families as their legal cases are heard. Similarly, there has been an outpouring of public support for Pablo Villavicencio, an Ecuadorian immigrant who faces deportation and was detained after delivering food to an Army base in Brooklyn.

On Monday, You’s wife joined a variety of groups — including the Asian American Federation, the MinKwon Center for Community Action and the New York Immigration Coalition — at a protest in Manhattan’s Foley Square. They called on the Trump administration to release You, and criticized its immigration policy.

“There is no question what is happening to this family is cruel and inhumane,” MinKwon Center for Community Action Executive Director John Park said in an email.

Aside from the protesters, elected officials like U.S. Sen. Kirsten Gillibrand (D-NY) have spoken out about the situation.

Rep. Grace Meng (D-Flushing) met with You’s wife at her district office in Flushing on Tuesday; the pair discussed how the immigrant’s plight has impacted his family.

The congresswoman, Gillibrand, and others including Reps. Nydia Velazquez (D-Brooklyn, Queens) and Gregory Meeks (D-Queens, Nassau) sent a letter about You’s case to ICE’s New York field office on Monday. The correspondence said his removal “would be cruel.”