Bill in state Legislature would allow undocumented people to get licenses 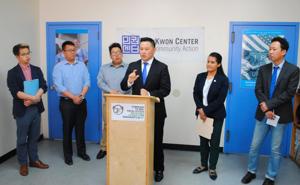 Assemblyman Ron Kim speaks at a press conference last week in support of legislation that would allow undocumented immigrants to apply for driver’s licenses.

Should unauthorized immigrants be allowed to apply for driver’s licenses?

Without question, some Queens leaders say.

“Having access to a driver’s license is a basic human right and not a privilege,” MinKwon Center community organizer John Choi said.

Along with Washington, DC, 12 other states have passed legislation allowing illegal immigrants to get driver’s licenses.

“This is not just about doing the right thing, it is about everyone’s safety,” Kim said at the MinKwon Center for Community Action’s office in Flushing. “It’s also about our economy.”

More people buying insurance, he explained, would be good for the economy and generate revenue for the state.

Kim also said the bill would be a win for recipients of Deferred Action for Childhood Arrivals or Temporary Protected Status, two federal programs that protect immigrants and allow them to get licenses but have politically uncertain futures.

According to Espinal, the legislation is a “no-brainer.”

“It’s very important and we should ensure safety for all,” she said. “For our kids, mothers and families and friends.”

The legislation would prohibit Department of Motor Vehicles employees from inquiring about the immigration status of someone applying for a driver’s license. Additionally, the DMV would be banned from releasing information about the applicants to law enforcement bodies unless the agency is presented with a warrant or subpoena.

When unauthorized immigrants are driving now and get pulled over, the assemblyman explained, the situation can be very different for them compared to U.S. citizens.

“They often self-reflect: ‘Should I stop my car and comply with the police officer or should I try to flee the scene?’” he said.

Many of the city’s unauthorized immigrants are extremely poor. The bill would not provide assistance for them to obtain car insurance.

Kim said he thinks “most people who want to drive are more than willing and able to pay for insurance.”

In the upper chamber, state Sen. Gustavo Rivera (D-Bronx) is carrying the measure, but Kim doesn’t expect the body’s Republican leadership to give it much support. Its chances of Senate passage would be strengthened if the chamber were Democratically controlled, the assemblyman said.

“I think by next year, I would hope, I would predict, we’ll be in a much better place to get it on the governor’s desk,” Kim said. “Having said that, if the governor makes this a priority, if he wants to push this, it will also get done, by the way.”

The office of state Senate Majority Leader John Flanagan (R-Suffolk) did not return a request for comment about the bill prior to deadline.