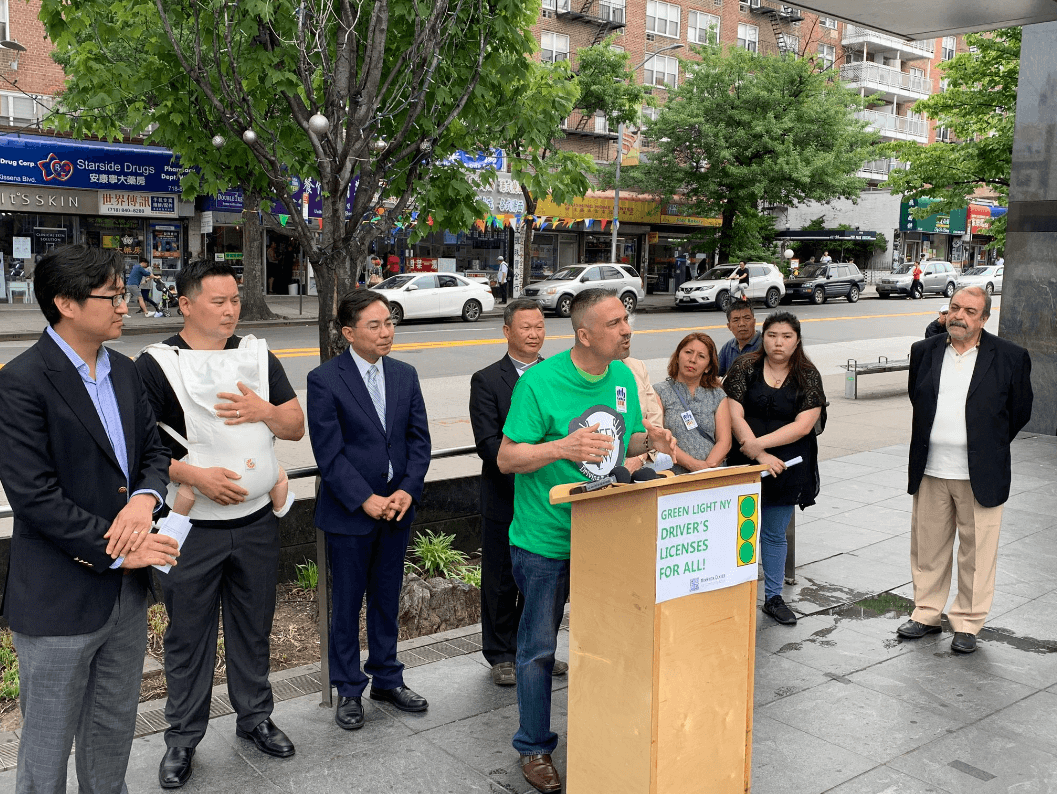 Community leaders were joined by elected officials and faith-based organizations on June 7 urging the state Legislature to take action and pass the Green Light Bill that would allow all people, regardless of their documentation status, to access a driver’s license.

The Green Light Bill would impact over 754,000 undocumented immigrants in New York state, ensuring all drivers will be properly tested and insured. Advocates of the legislation say it will prevent families from being unfairly split apart when undocumented drivers are stopped on their way to work or dropping their children to school.

At a press conference by Queens Library in Flushing at 41-17 Main St., John Park, executive director of the MinKwon Center for Community Center, said allowing driver’s licenses for all is a win-win for all New Yorkers.

“It already exists in a dozen states and that number and momentum continues to grow because people understand it’s the right thing to do,” said Park. “The only thing that could torpedo the bill is if Senate leaders, like Deputy Majority Leader Michael Gianaris in Queens, do not do what they must to ensure it gets on the Senate floor for a vote. Some representatives are afraid to have to vote on this bill, because it reveals what they are willing to sacrifice, or not sacrifice, to do the right thing. If our representatives do not do what they must to represent all immigrants, then they don’t get to be allowed to be our representative.”

If the bill is passed before the legislative session ends on June 19, New York will be the 13th state to issue driver’s licenses to undocumented immigrants.

Twelve states and the District of Columbia enacted laws to allow unauthorized immigrants to obtain a driver’s license. These states — California, Colorado, Connecticut, Delaware, Hawaii, Illinois, Maryland, Nevada, New Mexico, Utah, Vermont and Washington—issue a license if an applicant provides certain documentation, such as a foreign birth certificate, a foreign passport, or a consular card and evidence of current residency in the state.

“Faith in New York, stands in solidarity with our immigrant sisters and brothers who stand in the gap of a moral crisis in the nation,” said Crystal Walthall, interim executive director at Faith in New York, an interfaith federation of congregations building power in faith institutions through social justice and community organizing for a just New York. “Driver’s licenses were available to all residents of New York until 2002 and it is time to restore this right to all New Yorkers regardless of their immigration status.”

Assemblywoman Catalina Cruz, who represents District 39 which includes the neighborhoods of Corona, Elmhurst and Jackson Heights, where driver’s licenses for all profoundly impacts her constituents, singled out New York as one of the only liberal states that does not provide immigrants with the ability to obtain a driver’s license.

“There are an estimated 570,000 undocumented immigrants living within the five boroughs of New York City, “ said Cruz. “Not only does issuing licenses for those who are eligible to drive give people the opportunity for economic growth and opportunity, issuing licenses to undocumented immigrants is a fiscally and socially sound decision for all members of our community.”

According to Cruz, driver’s licenses for all means vast improvements to road safety, lower auto insurance premiums, and generated revenue for both the DMV and MTA.

“It would create a massive boost to the auto industry, including sales, vehicle taxes, gas taxes and registration and insurance fees paid directly to the state,” said Cruz.

Meanwhile, a Siena College poll revealed that 53 percent of New Yorkers are opposed to providing driver’s licenses to illegal immigrants. Republican opponents of the bill say that the proposal would reward violations of federal immigration law and create openings for voter fraud, according to City and State.

A sponsor of the Green Light driver’s license legislation since it was first proposed in 2009, state Sen. Toby Ann Stavisky said it’s now time to pass the bill with a Democratic majority in the New York State Senate.

“Undocumented individuals will be given an opportunity to obtain both driver’s license and a car insurance, allowing them to pay into a system that will make both drivers and pedestrians safer,” said Stavisky. “People often need vehicles to get to their jobs, school or appointments. Increasing the insurance pool will keep costs low for everyone. The economy will benefit, as will safety.”

State Sen. Michael Gianaris said driver’s licenses for all would be a fair and smart policy for New York.

“I wholeheartedly support this proposal and encourage all my colleagues to get behind this proposal before the legislative session ends,” said Gianaris.

Reverand Won Tae Cho, chairperson of the Korean American Sanctuary Church Network, said it is hypocritical for New York state, which declares itself a sanctuary state, to not pass the Green Light Bill.

“The Green Light Bill should be implemented so that citizens of New York state can be proud of our state,” said Cho. “Keeping immigrants in the clutches of illegality will destabilize society  and repeat a vicious cycle. To guide the undocumented into a legal space is to promote genuine security.”