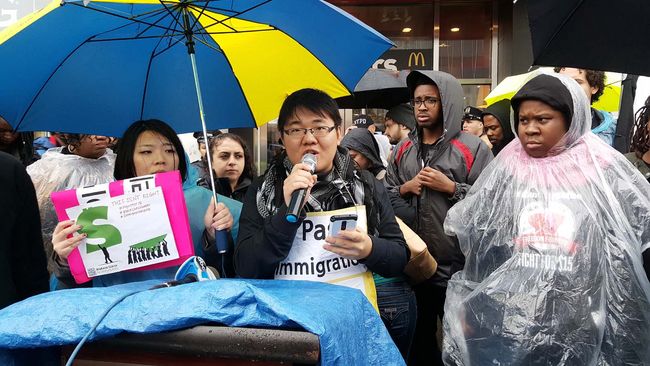 As the Republican presidential hopefuls prepared to debate again for the backing of the Old America, a new grass-roots alliance rallied Tuesday in hundreds of cities across the country to defend Forgotten America.

At one of the rallies, in front of a McDonald’s in Harlem, you sensed this new coalition could well determine who captures the White House next year.

At the forefront were nursing home and fast-food workers — members of the Fight for 15, a campaign to raise the minimum wage to $15 an hour.

When it started in 2012 in this city, with just a few hundred workers in a one-day strike, many dismissed their impossible dream. Three years later, the movement has snowballed into an unstoppable force — the biggest effort to raise worker living standards since the historic labor unionization drives of the 1930s.

Fight for 15 protestors gather in front of the 125th St. McDonald's in Harlem to ask for higher minimum wages on Tuesday.

Take, for example, Gov. Cuomo. His proposal this year for a $10.50 statewide minimum wage was condemned by Fight for 15. Cuomo soon changed course. By executive order, he raised the minimum wage for fast-food workers and state employees to $15, and now wants the Legislature to adopt it for all workers.

But Tuesday’s coordinated fast-food strikes in some 270 cities weren’t simply for higher wages.

For the first time, leaders of the Black Lives Matter and immigrant rights movements joined ranks in a united front with Fight for 15. Their placards proclaimed the new alliance’s slogan: “Economic Justice = Racial Justice = Immigrant Justice.”

“Black Lives Matter and Fight for $15 should be united because in both cases it’s largely about minority people,” Shawnette Richardson, 43, said.

Protesters at a 125th St. McDonald’s on Tuesday are clear in their demand: Economic and racial justice.

A widow and mother of three, she currently works at McDonald’s, and for years before that she toiled at a Checkers restaurant in Brooklyn.

“I was doing the job of four people but was paid for one — and got only $8 an hour,” she said.

Also speaking at the rally was Gwen Carr, mother of Eric Garner, the Staten Island black man who died last year in a police chokehold. She, too, linked the campaign against police abuse to the Fight for 15, noting it was time to “make the politicians pay attention.”

Then there was Jung Rae Jang, a 25-year-old undocumented immigrant and a leader among groups known as the Dreamers.

In Jang’s case, his family embodies the connection. He and his mother arrived in the U.S. from South Korea in 2005 on a visitor’s visa. She had agreed to marry an American citizen, he said, but things didn’t work out.

“Our visas expired and we were left here, undocumented, with no friends or family, and no money,” he recalled.

His mother ended up working at a string of minimum-wage restaurant jobs, her employers often pocketing her tips, the son said.

Eric Garner's mother Gwen Carr linked the campaign against police abuse to the Fight for 15, noting it was time to “make the politicians pay attention.”

“I’m protected, but my mother could still be deported,” he noted.

Those in the Fight for 15, Black Lives Matter and immigrant rights movements are not engaged in verbal jousting. Their desperation to change government policy is a matter of economic survival. Of life and death. Of justice and dignity.

They will not be silenced, not even after the final votes are counted next November.

Leaders of the Black Lives Matter and immigrant rights movements have joined ranks in a united front with Fight for 15.