Make yourself count in the 2020 Census (Queens Chronicle) 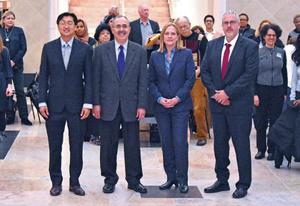 “Every voice that is heard, everyone who fills out that Census ... is more money for education, for our streets, for our senior centers, for housing, for everything ... it all comes from the United States Census. This transcends politics.”

Those were the words of Borough President Melinda Katz last November during a town hall about the 2020 Census.

Elected officials are imploring residents to make themselves counted when the tally is taken next year.

They’re hoping to avoid a repeat of 2010, when the state lost two seats in the U.S. House of Representatives, bringing the total down to 27.

Multiple published reports predict that the state is almost certain to lose another seat after 2020 and possibly a second.

There are 70 people on the Queens Complete Count Committee, which is meant to get an accurate enumeration. A second round of appointments will be conducted later in 2019. Many on the committee are members of the borough president’s Queens General Assembly and Immigration Task Force.

While many people might have the image of the Census taker going door to door and asking how many people live inside, 80 percent of participants are expected to submit their answers online in 2020. The government will not send out Census forms but rather mail with ID numbers that people will use to log into the system.

There is also the matter of a citizenship question possibly being included on the Census, which critics say would discriminate against immigrants and minorities.

John Park, executive director of the MinKwon Center for Community Action and a board member of NY Counts 2020, said the question would have a “larger impact on our community than in most places.”

Rep. Alexandria Ocasio-Cortez (D-Bronx, Queens) believes many people in her district are in danger of being undercounted because of the question.

“You’re going to be sick of hearing me talk about this by next year,” Ocasio-Cortez said at a town hall in Corona in April. “It’s the single most important thing that we’re going to do that will affect all of our issues over the next 10 years.”

She added, “When we don’t [count everyone], we don’t get the resources necessary to accommodate the population of the United States.”

Joseph Salvo, director of the Population Division of the Department of City Planning, said during the November meeting at Borough Hall, “We have to do everything we can to get people to respond” to the Census. “The population of Queens is very dynamic. Capturing it in a Census is difficult.”

During a congressional subcommittee hearing at LaGuardia Community College in late May, Rep. Carolyn Maloney (D-Manhattan, Queens and Brooklyn) said, “We’re going to provide service to people whether they are counted or not. We might as well get the funding for it.”

The main issue, though, might turn out to be people not wanting to be counted as opposed to simply being missed.

The penalty for breaking that is up to five years in prison, a $250,000 fine or both. He said the bureau will mount an intensive outreach campaign in part to reassure those who might be doubtful that the process is secure.