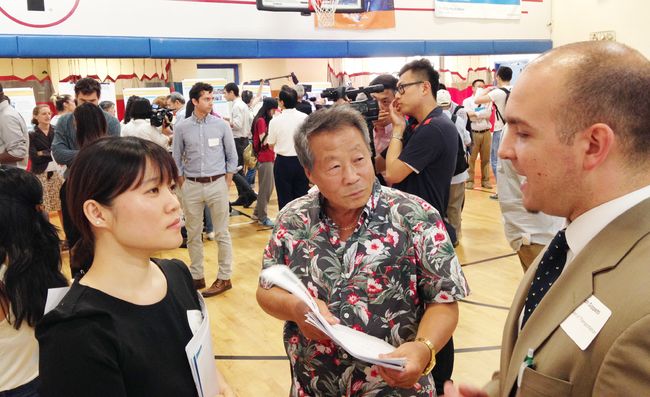 This was the second open house event held by the Department of City Planning for the Flushing West planning study. For most of the participating community members, the hottest topic of the night was affordable housing and how much of it would be available with an increase of residential development.

Hyun-Jung Kim — an engagement coordinator at the MinKwon Action Center, a Korean American community-based organization — said the center’s biggest priority is to fight for the affordability of housing for the most vulnerable populations. This includes senior citizens struggling to remain in their homes, low income families being priced out of the neighborhood and community members with limited English skills.

“I think the communities here in Queens are sometimes forgotten in conversations about the need for affordable housing. There are a lot of very vulnerable populations here,” Kim said. “We’re concerned when those folks might get swept under the carpet when Queens is just seen as a hot market, the next Brooklyn.”

John Choe, executive director of the Greater Flushing Chamber of Commerce, said that he believes changes in Flushing West are long overdue. According to Choe, many issues in the area — from transportation upgrades to affordable housing — have not been adequately addressed over the past two decades.

“Affordable housing, for example, that could have been addressed in many different ways much earlier by the city,” he said. “To me, the demand far outweighs the investment that the city has put in over the past 20 years of affordable housing, and that’s just one area.”

Ken Cohen, president of the NAACP’s Northeast Queens division, added that although the Flushing West planning study has shown that 71 percent of the target area is of Asian descent, there are still issues which concern his organization.

“Flushing is a diverse place where people of all colors and ethnic backgrounds live,” Cohen said. “Affordable residential housing is much needed, jobs are much needed, so there is a call for a number of things that we would like to see as the NAACP.”

While affordable housing is a priority for many of the forum’s attendees, there are also environmental factors involved in the Flushing West Planning Study.

Alexandra Rosa, consultant for Friends of Flushing Creek, was there to talk to representatives of the Department of Environmental Protection (DEP) about increasing efforts to clean up Flushing Creek. According to Rosa, one billion gallons of raw sewage and storm water runoff is dumped into the creek each year — and the group takes issue with a DEP plan that would continue the practice of releasing sewer overflows into the creek.

“Friends of Flushing Creek is committed to help publicize the need for and to get projects that will actually make Flushing Creek a recreation destination, and to clean up the pollutants,” Rosa said.