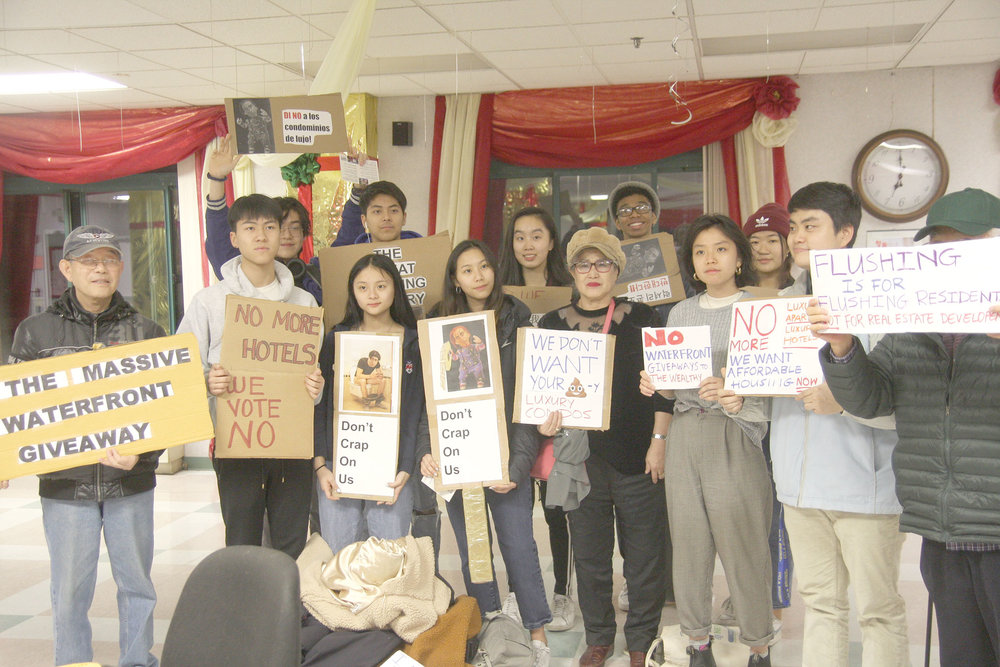 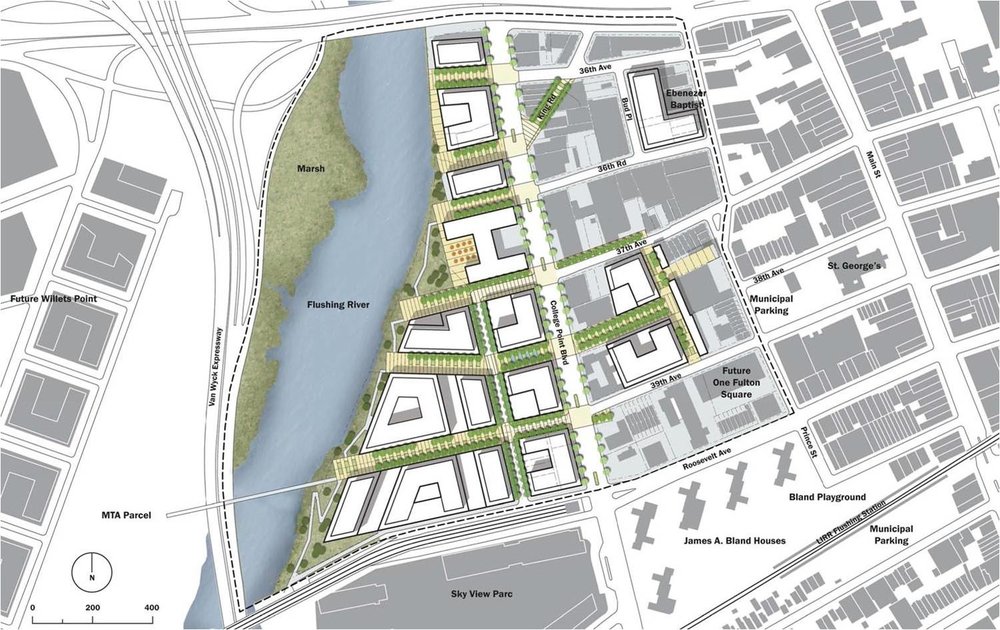 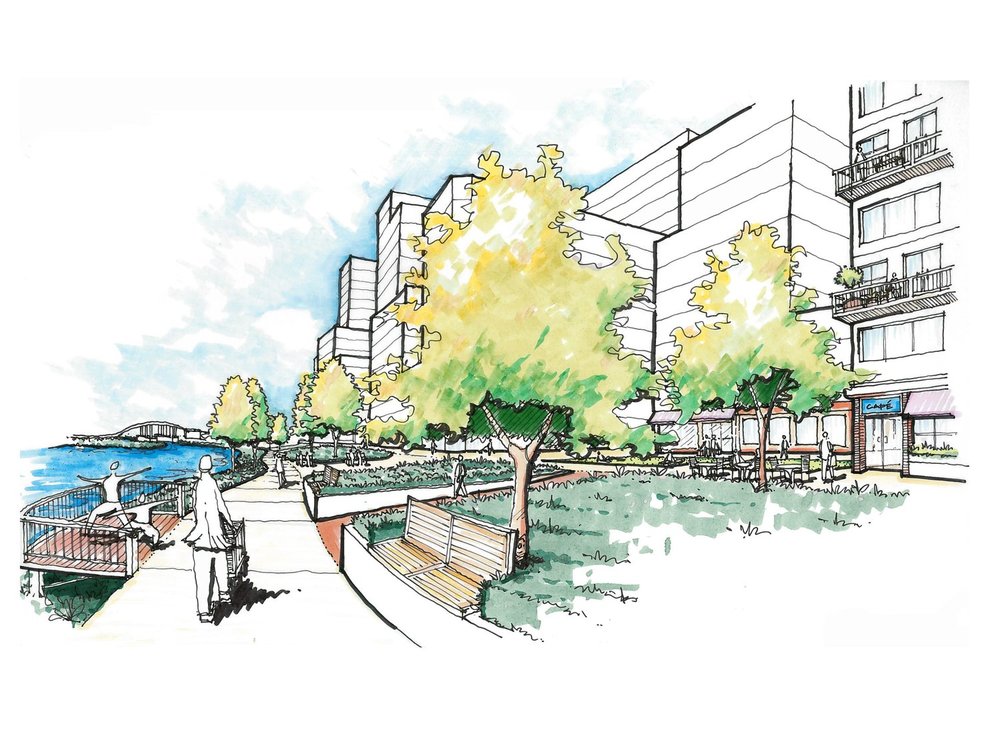 A proposed rezoning of the Flushing waterfront to develop a new mixed-use neighborhood has sparked the ire of some neighbors, advocates and community groups.

The proposal includes 1,500 parking spaces and 3.14 acres of open space. Construction to “transform underutilized, vacant and environmentally-challenged areas into a vibrant, new mixed-use community” could this year and open by 2025.

Community Board 7 members discussed the proposal last week at a committee hearing. The meeting drew opponents from housing advocates and local organizations like the MinKwon Center for Community Action and Chhaya Community Development Corporation (CDC).

Seonae Byeon, a housing organizer with MinKwon Center, said building more luxury apartments in the area won’t solve the plethora of issues in Flushing, like the need for more affordable housing, senior housing and senior centers.

“The proposed rezoning doesn’t fit with the community,” she said.

Byeon also blasted the process for lacking community feedback or support, and said that no environmental impact study, including an analysis of how the project would impact sewage overflow, has been conducted.

She noted that rents are getting higher not just for longtime Flushing residents, but also small businesses.

“We want to stop the mass displacement happening in Flushing,” she said. “We don’t want to be fooled by the developers.”

Byeon was among about two dozen people who attended Monday’s Community Board 7 meeting to protest the proposal. Although the Special Flushing Waterfront District was not on the meeting’s final agenda, the demonstrators, young and old, held up signs to call attention to their opposition.

Half an hour after the meeting began, as new District Attorney Melinda Katz was speaking to the board, the demonstrators chanted, “Stop Flushing West!” as they marched out of the room.

Eugene Kelty, chair of CB7, chastised the protesters as “rude and arrogant.” He demanded quiet because the meeting was taking place in a nursing home.

“When people don’t pay attention to that, I think that’s rude and inconsiderate,” he said after the group left. “Nobody stops them from putting up their signs.

They ran out the door without even staying for the public participation part,” Kelty added. “Shame on them for being rude and inconsiderate.”

During the CB7 meeting, Cassandra Carrillo, an organizer with 32BJ SEIU, asked the board to consider adding language to recommend prevailing wage jobs for building service workers in their recommendation for the ULURP.

She noted that the service employees union has worked with many community boards throughout the city that have adopted that language in their recommendations for projects.

“It is a livable wage that comes with significant benefits for health and retirement embedded into the wage,” Carrillo said.

The Special Flushing Waterfront District rezoning will be discussed at CB7’s next committee meeting on Tuesday, January 21 at 7 p.m. at the Union Plaza Care Center.

Among the groups paying attention to the rezoning proposal is Guardians of Flushing Bay, a coalition of boaters, residents and environmental advocates.

In a statement, Rebecca Pryor, a program coordinator at Riverkeeper and Guardians of Flushing Bay, said that if approved, the waterfront district will have “immense impacts” on the shoreline and health of the creek itself.

“Building massive residential development could overwhelm the creek’s overburdened infrastructure, which already releases over one billion gallons of raw sewage and contaminated stormwater runoff into the creek every year,” she said. “On the other hand, the proposed district has the potential to provide new access to a virtually inaccessible stretch of waterfront.

“If this idea wins approval, it must be implemented in a way that would enhance, not burden, the waterway,” Pryor added. “It should enhance coastal resiliency, create recreation opportunities, support ecological restoration and provide enjoyable, equitable access to the waterfront.”

Assemblyman Ron Kim said in a statement that he has "strong reservations" about the rezoning, from the lack of public involvement and transparency to the proposal itself.

He called on his fellow Flushing representatives to stand together and "not sell out" the neighborhood.

"At a time when our subways are crumbling and our schools and libraries are overcrowded, we must do everything we can to create intrinsic value in our communities," Kim said. "Adding thousands of luxury condo is simply about extracting as much value and profits as possible out of our communities."