Undocumented, Asian and taking up arms in the immigration fight (The Guardian)

South Korean and raised in New York, Jong-Min You explains why many Asian undocumented immigrants are not applying for deportation relief 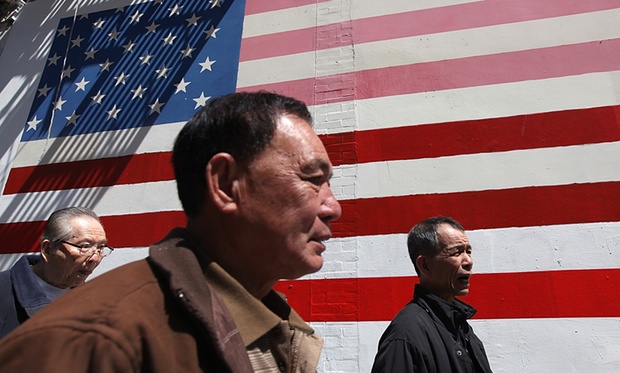 Although Mexicans represent 29% of the entire foreign-born population in the US, Asian immigrants, US citizens and those who are undocumented, also make up 29%. Photograph: Justin Sullivan/Getty Images

After spending the day helping oversee his parents’ Brooklyn deli, Jong-Min You spends most nights poring over law school texts working towards his dream job, which the US government says he cannot legally have.

At 35, You has been on the cover of Time magazine, featured on panels hosted bypresidential hopefuls and spoken at an Ivy League university. Yet, in the eyes of the United States, where he has lived for nearly all of his 35 years, he is living illegally.

It has been three years since the Obama administration launched its Deferred Action for Childhood Arrivals (Daca) program, which gives temporary immigration relief to young undocumented immigrants. You was too old to qualify for the initial version of the program, but he would qualify for a 2014 expanded version of the program that removed the age cap and introduced measures for parents of undocumented people, if not for a court decision that put the program on hold.

If he has the chance to apply for immigration relief, You hopes it will be alongside more Asian immigrants than took part in the first three years of the program.

From the time Daca launched in August 2012 to March 2015, only 21% of eligible Asians applied for the program, compared to 77% of Latin Americans, according to a Migration Policy Institute (MPI) analysis released earlier this month.

“A stereotypical illegal immigrant would be a Mexican worker, wouldn’t it?” You told the Guardian.

You is grateful for the work the Latino community has done to push for immigration reform, but wants the Asian community to have as strong a voice to ensure its needs are being addressed and to prevent members of the community from “suffering in silence”.

You learned he was undocumented while attending one of New York City’s top high schools, where he applied for a hospital training program. His mother told him he did not have the green card necessary to enroll. “The cultural norm is not putting your dirty laundry in public, so you don’t tell anybody about this, and your parents tell you not to tell anybody, so you don’t,” You said.

He said that his parents are not supportive of their son being the self-described “token Asian” for immigration stories, but he was compelled to join the movement to show it is OK to speak openly about being undocumented.

“I think that’s a little bit of a hindrance to the issue,” You said. “Whereas Latino children and families are chilling at rallies – and more power to them – I don’t think you’ll see the same thing with an Asian family.”

But that is one of the reasons he believes it is important for more Asians to be included in the undocumented movement. His parents had overstayed the family visas they acquired as students to travel to the US from South Korea in 1981. They pay US taxes and own their home, but they have not been able to travel to South Korea before or since their parents died, because if they leave the country, they do not have a way to get back in.

And the expansion of Daca would only grant temporary relief, leaving You and his parents without any way to become citizens, a necessity if he wants to accomplish his dream of being a federal judge.

In 2003, he graduated from the University of Tennessee-Knoxville in 2003, where he was classified as an international student. After closing things down at the deli, he studies to improve his LSAT scores so he can apply to Yale Law School, which he notes is one of two law schools that all of the nine supreme court justices attended.

After graduating college, he had to confront a world where his citizenship status severely limited his career options, despite having a college degree. While working a number of odd jobs, and continuing to help in his parents’ store, he became involved with the immigration movement.

But increasing representation of Asians in the movement has been an uphill battle. The MPI analysis said that along with cultural pressures, research shows that the community is reluctant to openly discuss their immigration status because of heightened levels of fear about the risk of deportation.

Tiffany Panillo, a legal advocate for Los Angeles’ Asian Americans Advancing Justice, told MPI that outreach is key for getting people to apply for relief. “We don’t get a lot of Asians who don’t apply after we tell them more about the program,” she said.

Analysts, and You, also credit the robust Latino-US news outlets like Telemundo and Univision for pushing immigration into the community’s homes and making it a central issue. And while Asians are the fastest-growing racial group in the US, they are far from getting that type of representation in national media.

“There’s so many of us and I don’t really feel like we have a seat at the table or on TV,” You said. “There has to be more than just one segment of the population which a lot of people think is representative of the undocumented movement.”