Ahead of Census, Queens nonprofits hit the streets to fight fear and confusion 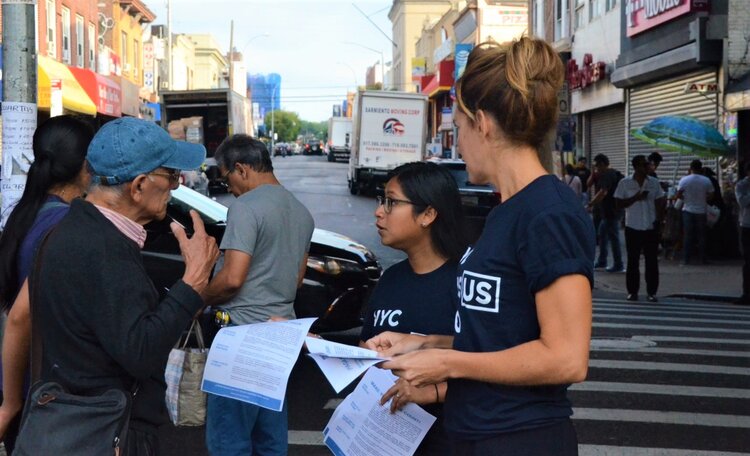 NONPROFIT WORKERS HIT THE STREETS TO ENGAGE NEW YORKERS AHEAD OF THE U.S. CENSUS, WHICH BEGINS MARCH 12. PHOTO VIA NYC.GOV.

Queens nonprofits are gearing up to ensure every resident participates in the 2020 U.S. Census, 10 years after pockets of the borough accounted for extremely low census completion rates and amid ongoing concerns that the Trump administration’s bid to include a citizenship might still depress turnout among immigrant communities.

In a borough where 47 percent of the total population are immigrants, community and advocacy will attempt to bridge the digital divide and combat language barriers to reach historically undercounted groups. The self-reported portion of the census will, for the first time, be conducted online and over the phone this year, adding to the logistics challenge.

But immigrant communities aren’t the only populations considered “hard to reach,” by the city. In neighborhoods across the borough, particularly in Southeast Queens, response rates dropped below 50 percent during the last U.S. Census in 2010.

The City Council and de Blasio Administration have committed more than $4 million to Queens nonprofits as part of the Complete Count Fund. The fund totaled $40 million citywide to promote on-the-ground outreach. At least 35 Queens recipients received grants between $15k and $250k to support census organization and education.

“We must stand and be counted,” said Mayor Bill de Blasio. “This historic investment in grassroots organizing will help mobilize New Yorkers to fight for the resources we are owed.”

At the Day Care Council of New York, which received $150,000 from the city, organizers are committed to ensuring more residents complete the census in Jamaica, where response rates have been historically low. Senior research analyst Mai Miksic said he “cannot emphasize enough” how few children under five years old are counted. The lack of responses impacts the amount of federal funding that nonprofits like theirs receive.

“We’re committed at the centers we work with that those children and their families will be counted,” Miksic said. “I think there’s so much mobilization citywide — other nonprofits working in similar spaces like settlement houses, I feel optimistic that [the CCF] is going to make a big difference"

New York City’s rate of self reporting in the 2010 Census was 61.9 percent — more than 10 points lower than the national average. Many Queens neighborhoods were below the city’s rates; communities in and around Jamaica self-reported at rates below 56 percent of the population. South Ozone Park, Rosedale and Hollis were below 50 percent. 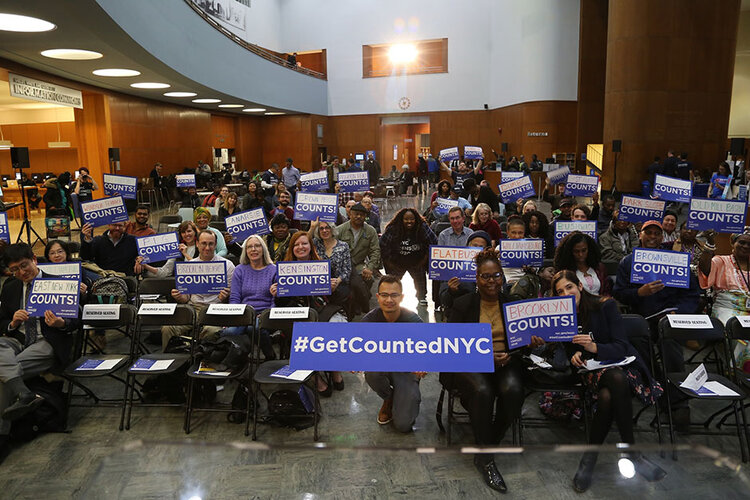 THE CITY IS HOSTING CENSUS COUNT ADVOCACY EVENTS IN THE BOROUGHS. THEY HAVE SO FAR GONE TO BROOKLYN. PHOTO VIA NYC.GOV..

John Park, the executive director at the MinKwon Center for Community Action, broke his organization’s strategy into two main parts. First, the organization has been promoting awareness of the upcoming census before login information is released and people can begin filling out the questionnaire online on March 12. After the official period begins, they’ll take to the streets.

“We’ll start hitting certain census tracks near our office in Flushing, a historically undercounted area,” said Park, whose organization received $150,000. “We’ll go door to door hitting addresses [while equipped with] with internet connected phones and tablets. Because this is the first online, it'll be really powerful to be able to include urls in mass text and link so people can just click with their thumbs and be ready to fill it out.”

The Trump administration pushed to include an residency status question on the census last year, but was eventually rebuked. However, lawmakers and advocates fear that the fight might still haunt immigrant groups who might not participate in the census because of it.

“There’s still a baseline level of fear and distrust in immigrant communities based on where the federal government is at right now,” Park said. “It’s our job to not let this president, this administration, win.”

“We have to tell people to still be proud,” he continued. “You’re here, living in New York City; you can still raise your hand and demand your fair share of resources and political representation.”

When the period for self-reporting closes in mid-May, the U.S. Census Bureau sends out “door knockers” to follow up with households that have not responded. Sharing personal informaton is a particulalry sensitive issue in for undocumented residents of New York City.

Some of the Queens organizations are dedicated to alleviating those fears. With billions of dollars in federal funding up for grabs, creating the most accurate account of a population matters. Organizations like Desis Rising Up and Moving are working to reassure the communities they work in that the biggest danger lies in not being counted.

“A lot of the public engagement was intentional not only to defeat the immigration question but to engage the community in the Census so when it actually came around they would be familiar with it,.” said DRUM Executive Director Fahd Ahmed.

Ahmed told the Eagle that DRUM is using its $150,000 grant to combat the distrust using outreach materials and social capital from familiar neighborhood residents. He said the efforts will make a difference in understanding and completion.

Though the census instruction guides are available in nearly 60 different languages, the self response section itself will only be available in 12: Spanish, Chinese (Simplified), Vietnamese, Korean, Russian, Arabic, Tagalog, Polish, French, Haitian Creole, Portuguese and Japanese.

More than 56 percent of Queens residents speak a language other than English at home, according to a 2015 report by the city. Bengali, the third most-spoken language, is not included on the self-response section, however.

DRUM has been working with the city to address the language barriers in South Asian communities, but Ahmed said the organization is fighting deliberate attempts to suppress responses.

“For us, the [pointed questions and language barriers] were intentional to be undercounted and to lessen representation and the resources we have,” Ahmed said. “Filling out the census is very much a part of resistance to the efforts to marginalize our communities form the larger society.”