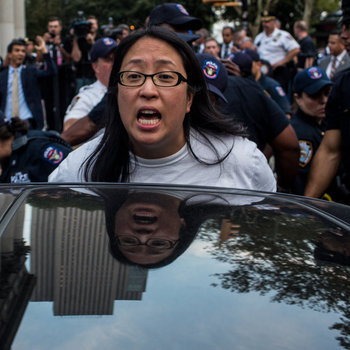 Surrounded by a crowd of thousands gathered in support of immigrants and enmity of President Donald Trump, New York Attorney General Eric Schneiderman delivered a rousing speech Tuesday evening, condemning Trump's decision to end the Obama-era immigration policy of Deferred Action for Childhood Arrivals (DACA), promising "I'll see you in court." Shortly after Schneiderman's speech, demonstrators marched south to the entrance of the Brooklyn Bridge, where roughly a dozen were arrested for blocking traffic and later charged with disorderly conduct.

Between chants of "No hate, No fear, Immigrants are welcome here!" and "Up! Up! With liberation! Down! Down! With deportation!" officials, including NYC Public Advocate Letitia James, condemned Trump's action as cruelly motivated by a racist anti-immigrant agenda.

"Consistent with their anti-immigrant animus from the first day he took office, the Trump administration has now decided that instead of supporting these young people who are a complete success story, they've chosen to attack them," Schneiderman said. "But we are not going to allow our dreamers to be villified and scapegoated. And I will go to court to protect our dreamers and to protect the values we share as New Yorkers."

"Nearly 42,000 New Yorkers rely on DACA," Schneiderman continued. "It has empowered them to come out of the shadows and build lives. Dreamers play by the rules. Dreamers work hard. Dreamers pay taxes. America is the only home the overwhelming majority of them have ever known. They deserve to stay here."

Minutes later, supporters of DACA recipients were in handcuffs on Park Row after ignoring NYPD commands to disperse and leave the roadway. Among them was City Council Member Ydanis Rodriguez, who had helped lead the march south out of Foley Square and stood up multiple times to encourage a dense crowd of supporters.

"Just been arrested fighting for our undocumented brothers and sisters near Foley Sq. We stand united behind them and their quest for justice," Rodriguez tweeted shortly after being taken into custody. An NYPD spokesperson confirmed that 47 people were arrested over the course of last night's demonstration, with most charged with disorderly conduct.

Tuesday night's protest, which was organized by the New York Immigration Coalition (NYIC), came only three hours after dozens were arrested near Trump Tower in protest of the decision to end DACA. Late last night, the President tweeted that he will revisit the issue in six months if congress does not act to legalize DACA. It's unclear what the President meant.

"I have coworkers that are under DACA, and I've seen the success of the program. I can't believe they want to take it down," Lorena Kourousias, 44, said. "We're going to be fighting in the streets until we get a permanent solution. Not just for them but for all 11 million people that are in the shadows."