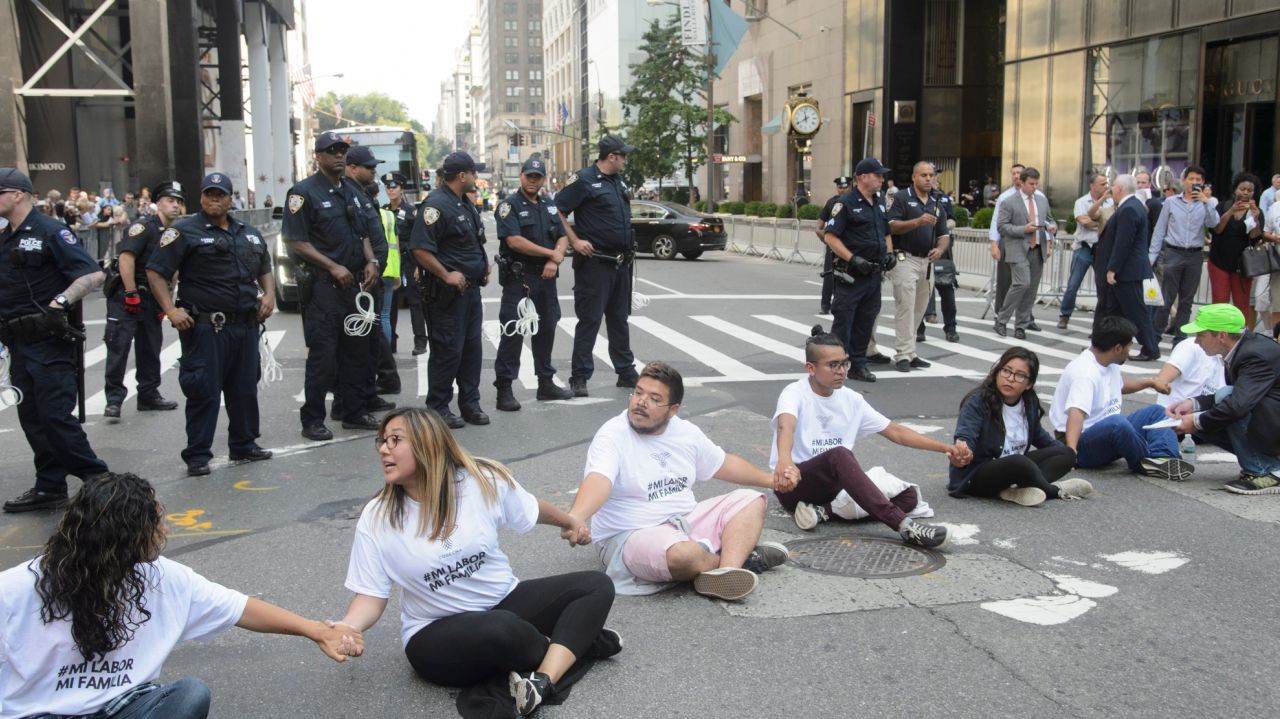 Protestors sit on Fifth Avenue in front of Trump Tower to speak out against the administration's decision to end the DACA program on Tuesday, Sept. 5, 2017. (Credit: Charles Eckert)

By Laura Figueroa and Ivan Pereira

Mayor Bill de Blasio stood in solidarity with 30,000 New York City residents on Tuesday who were enrolled in the Deferred Action for Childhood Arrivals program, as nearly four dozen arrests were made at protests over President Donald Trump’s decision to eliminate the policy.

“This is a day of heartbreak for so many,” de Blasio said during a rally on the steps of City Hall in support of DACA, a federal program that was designed to protect immigrants who came to the country illegally as children. “We are here to stand by each and every one of them, 30,000 New Yorkers this morning were put in the cross hairs.”

A crowd of about 1,000 people, meanwhile, gathered in Foley Square around 6 p.m. to defend DACA, holding signs that chastised the president and his administration. New York Attorney General Eric Schneiderman riled up the crowd, which often booed Trump and chanted, “no hate, no fear, immigrants are welcome here.”

DACA, he said, “has empowered [immigrants] to come out of their shadows and live lives.”

Schneiderman renewed his vow to sue over the DACA decision, much to the cheers of the crowd. “Ladies and gentlemen, immigration has been and always will be the lifeblood of this state.”​

Protesters then tried to march over the Brooklyn Bridge, but were stopped short by police. Cops met the march near the entrance of bridge, and 13 people were arrested after some protesters sat down in the street when they were denied access.

The arrests were in addition to the 34 people who police said were cuffed with plastic zip ties outside Trump Tower at a rally earlier Tuesday.

Eric Phillips, a spokesman for de Blasio’s office, said those who cooperated with police would be ticketed and released without having their fingerprints taken.

Shouts of “Undocumented! Unafraid!” and “No papers! No fear!” could be heard outside Trump Tower as some 200 people gathered near the Fifth Avenue building shortly after Attorney General Jeff Sessions announced the Trump administration was rescinding the program.

Demonstrators linked hands and formed a human chain that blocked traffic along 56th Street and Fifth Avenue in front of the president’s namesake tower.

“I don’t have words to describe how I feel,” Brazil native Thais Marquez, 23, who now lives in Newark, New Jersey, told the crowd. “We don’t know what’s next for our future.”

Among the demonstrators, some of whom gathered at 59th Street and Fifth Avenue shortly before 11 a.m. to march southward to 56th Street, was Luis Chicaiza. A DACA recipient from Hackensack, Chicaiza, 28, said he moved to the United States from Ecuador when he was 10 years old, and he now works at a Cheesecake Factory in New Jersey.

The crowd spoke as one with a chant of “Aqui estamos, y no nos vamos (We’re here and we’re not leaving).”

“DACA wasn’t a gift. There were many brave students who fought hard for this,” said Cata Santiago with Movimiento Cosecha, one of the advocacy groups that organized the demonstration.

Santiago, speaking to rallygoers, said the program has been “life changing” for the 800,000 immigrants who qualified for the program that allowed enrollees to remain in the country to work and study without the threat of immediate deportation. There are 42,000 DACA recipients in New York, according to Gov. Andrew Cuomo.

“It is our job to keep fighting,” Jessica Moreno-Gaicho, a DACA enrollee from Richmond, Virginia, told the crowd. “It is time to fight for all undocumented communities.”

Several of the protesters outside Trump Tower noted that DACA only provided temporary protection for immigrants, and they called on Congress to pass legislation that would offer a more long-term solution for the nation’s estimated 11 million immigrants living here illegally.

Trump’s phaseout of DACA, an Obama-era program created by executive order in 2012, gives Congress six months to come up with an alternative.

“I’m tired of this conditional protection,” said protester Jose Luis Santiago, of Homestead, Florida, and who is a DACA beneficiary. “We’re asking for permanent protection.”

Back on the steps of City Hall Tuesday evening, Cardinal Timothy Dolan and the Rev. Al Sharpton joined de Blasio in a show of support for the so-called Dreamers.

“As a pastor, I can tell you these Dreamers are not criminals, aliens ... intruders ... they are us, they are our people,” Dolan said. “To demonize them as threats or terrorists contradicts the bible, America, New York and common decency.”

De Blasio said the city will “use every legal avenue” to defend New Yorkers affected by Trump’s decision.

“Imagine if you had done things the right way and seen your rights taken away with the strike of a pen,” de Blasio said at the late afternoon news conference. “We are going to stand up to this.”

The mayor urged Dreamers who need legal advice to call 311 and promised those who are feeling unsure about what the future holds that the NYPD would not act a deportation force.

“We are here for you,” the mayor said.

“I still believe in the dream,” said James, who called the decision to end DACA “blatantly racist.”

Stringer said he’s never been more ashamed of Trump and his administration.

“But make no mistake, we are here today to send a loud and clear message to Congress: You keep this up and you’re going to be on the unemployment line and we will put you where you belong which is out of public life,” the comptroller added.

“That action means that today, Sept. 5, 2017, is going to go down as a dark day in our nation’s history,” said Steven Choi, executive director of the New York Immigration Coalition. “I ask one simple question. How does this decision make America great?”

“How does it make America great to strip this economy of [800,000] workers, to rob this economy of $460 billion in GDP and to tear apart our families and our communities?”

DACA recipient Angie Kim, a 34-year-old organizer at the MinKwon Center for Community Action in Flushing, Queens, was overwhelmed by emotion as she called the Trump administration’s actions “disgusting.”

“I cannot tell you what it means to have DACA,” said Kim, who came to the United States from South Korea with her family when she was 9 years old. “What we can do now is fight back even harder.”

Flor Reyes, a 20-year-old senior at Lehman College, said being covered by DACA gave her a “sense of hope” and inspired her to apply to college.

Reyes broke down in tears as she thought about telling her mother, who has five other children, that she may no longer be able to help her financially.

“To hear we will no longer have this sense of security – it’s scary,” she said. “We just urge Congress to take action.”

Similar protests were held on Aug. 30, when news broke that Trump was considering a repeal of the program, and again on Aug. 15, when the president was in town for meetings.

DACA applies to immigrants who came to the country illegally before their 16th birthday, who were younger than 31 before 2012, haven’t been convicted of a felony or major misdemeanors, and are in school, graduated from school or are honorably discharged veterans of the armed forces or Coast Guard.