If the president were to look outside his window, he'd see the DREAMers he wants deported. 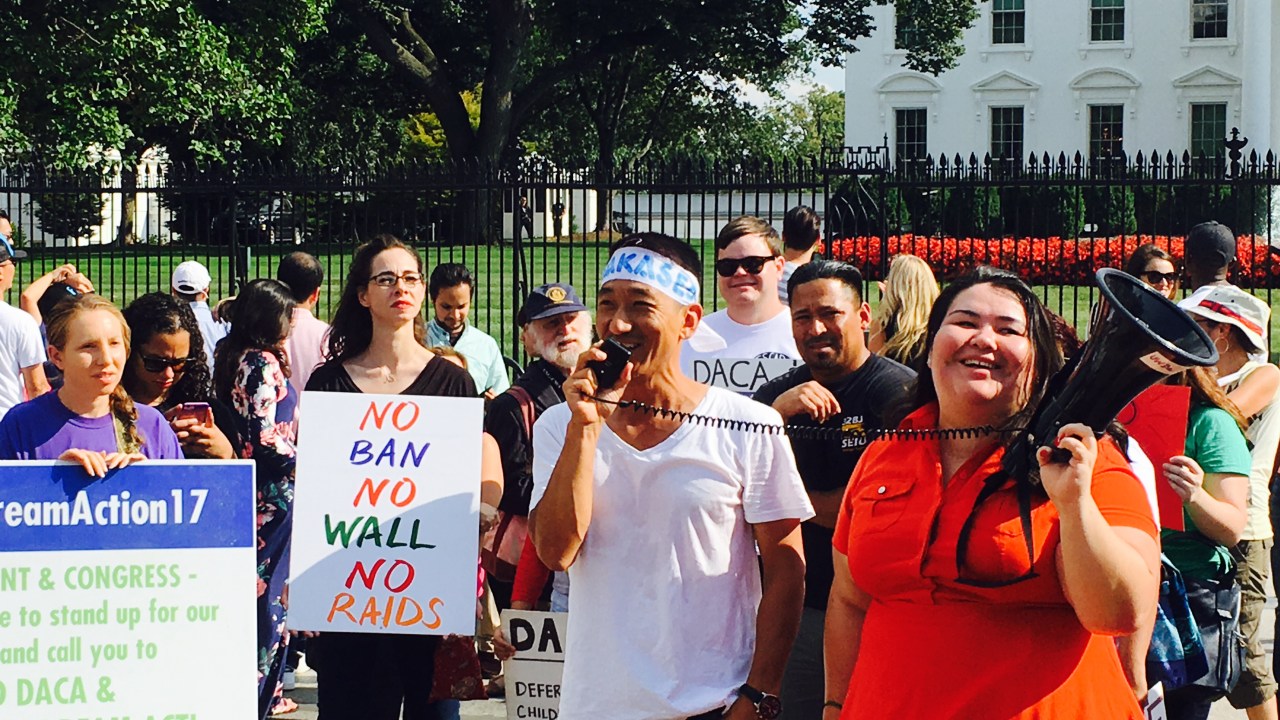 WASHINGTON, D.C. — President Donald Trump has said he would treat so-called DREAMers, or undocumented immigrants brought to the country as children, “with heart.” But that sentiment hasn’t exactly dovetailed with the White House’s serious consideration to pull the plug on an Obama-era deportation relief program known as the Deferred Action for Childhood Arrivals (DACA), which has granted nearly 800,000 young immigrants the temporary ability to legally work and achieve higher education.

In response to a potential repeal of the DACA program, immigrant advocates and beneficiaries have began holding a 24-hour vigil outside the White House since August 15 to inspire the president to treat them with heart. Since mid-August, various immigrant advocacy groups — including United We Dream, Asian Americans Advancing Justice, National Korean American Service & Education Consortium (NAKASEC), and New York Immigration Coalition — have been taking turns holding signs, chanting slogans, and answering tourists’ questions in Lafayette Park north of the White House about the DACA program as well as Temporary Protected Status (TPS), which the Trump administration is also considering rolling back. 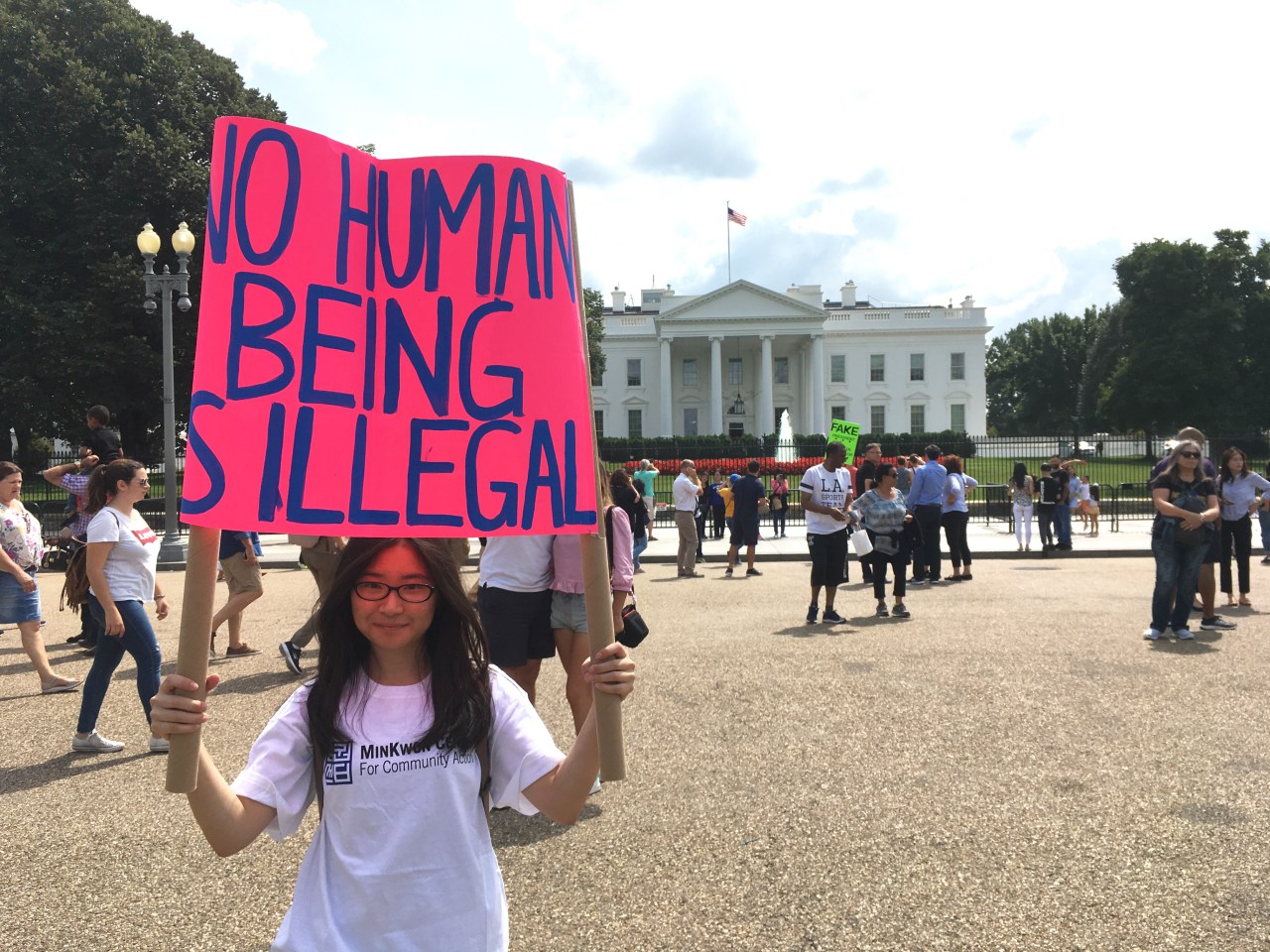 [Yoojin Kim, a DACA beneficiary, holds a sign reading "No human being is illegal" during a rally at the White House on August 28, 2017. CREDIT: Esther Lee/ ThinkProgress]

On a breezy and sunny Monday afternoon in late August, Yoojin Kim — a 24-year-old DACA recipient from the same Queens borough that Trump grew up in — had come to the rally to relay her own “undocu-story” to inform curious tourists outside the White House about what the program means to people like her. She and her mother had fled South Korea when she was eight years old. On this day, Kim had been walking around an imaginary perimeter around a dozen signs laid on the ground for hours, while holding a large neon pink side blaring the words, “No human being is illegal.”

“For some of us, this is a lifeline.”

“I’m here [to rally] because the program can be cancelled,” Kim told ThinkProgress, still perching the sign over her head to shield herself from the midday sun. “For some of us, this is a lifeline. I have a job. I’m not going to be able to have a job. I was planning on going to law school, but that may not work out if DACA gets cancelled.”

Angie Kim, a 34-year-old DACA recipient with the advocacy group Minkwon Center in New York, was at the rally because she wanted the president to keep the program in place. She came to the country at the age of nine from South Korea, but because of legal complications with the immigration system, she wound up being the “sole undocumented member” of her family. Her other family members are legal immigrants or citizens.

“If I lose [DACA], I won’t be able to work and make a living,” Kim told ThinkProgress during a break between fielding questions from tourists about immigration. “It’s very much a program that directly impacts everyday livelihood of a lot of immigrants.”

Jung Rae Jang, a 27-year-old DACA recipient, was also at the vigil in a black t-shirt that read, “I am an immigrant.” Brought to the country at the age of 15 on a student visa, Jang was unable to legalize his immigration status, but he did go on to get his college degree. Now as an adult, he is helping to support his family on the income he earns as a community organizer at the Minkwon Center. But he’s worried that once the DACA ends, that steady stream of income will end.

“I’m a DACA beneficiary so I understand how important this program is and how it changed my life as well as how it changed the lives of millions of others,” Jang said, observing that tourists, after learning what DACA is, have been supportive of his efforts to bring awareness to what’s at stake for him. “We want to protect and defend DACA. A lot of people are interested in what’s going on and people are generally supportive.”

Media coverage of undocumented immigrants has largely centered on the demographics most impacted, such as people from Latin American countries. But undocumented Asian immigrants like the ones ThinkProgress spoke to also have reason to be concerned once DACA is dismantled. They are among the estimated 130,000 undocumented immigrants of Asian descent who are DACA-eligible. All three were visibly distraught by the prospect of not knowing where their next paycheck may come from — if at all, and not knowing how they would continue to grow their talents in this country.

“There are a lot of Asian American immigrant advocates, it’s just a lot of them not being discovered,” Angie Kim explained. “Asian Americans haven’t really been approached and taught the leadership of taking the movement in a forward and vocal fashion, but that is definitely changed.”

“Just coming here is a lot because most people don’t do this, so even if they’re not screaming at the top of their lungs, they’re showing a lot of leadership,” Kim added.

Despite what happens on the executive-branch level, immigrant advocate Sookyung Oh has hope that states and localities could protect immigrants when the federal government won’t. As the D.C. area director at NAKASEC who works closely with advocacy groups in nearby Virginia, Oh was at the rally to support the DREAMers. But she was also there to make people aware that state races could have a huge impact on state and local immigration legislation.

“We do national and state and local work because if anything, what this Trump administration has shown us is that if we can’t pass things or protect what we need protected on the federal level, we need to focus on what are state and local solutions to mitigate any potential federal harm,” Oh said. She explained that her group was part of a coalition of Virginia-based advocacy groups that are trying to make sure the next governor will help pass legislation to ensure all undocumented immigrants can acquire a driver’s license and for students to pay in-state tuition.

“People are just trying to work, trying to get to the hospital — if they’re doing it undocumented, they’re doing it in danger everyday,” Oh added, explaining that driving without a license could lead to a police interaction where legal status could be questioned. “If you’ve been to Northern Virginia, if you’ve been to most parts of Virginia, you have to have a car. We’re not like D.C., or L.A., or New York City where we have a great public transportation system.”

In the state of Virginia, in-state tuition is tied to DACA status, so once that’s taken away, it’s likely that many students won’t be able to afford college anymore. Oh is hoping that legislators will change Virginia’s tuition rate to be determined by residency, rather than DACA.

“If we can pass that legislation it would immediately change people’s lives.”

“If we can pass that legislation it would immediately change people’s lives,” Oh said.

“Our DACA-mented community members and family members made it clear to us that they wouldn’t let anything happen to DACA without a fight and we also realized that a lot of people don’t know anything about DACA, so what’s the best thing to do about DACA? ‘We need to raise awareness of DACA,'” Oh said.