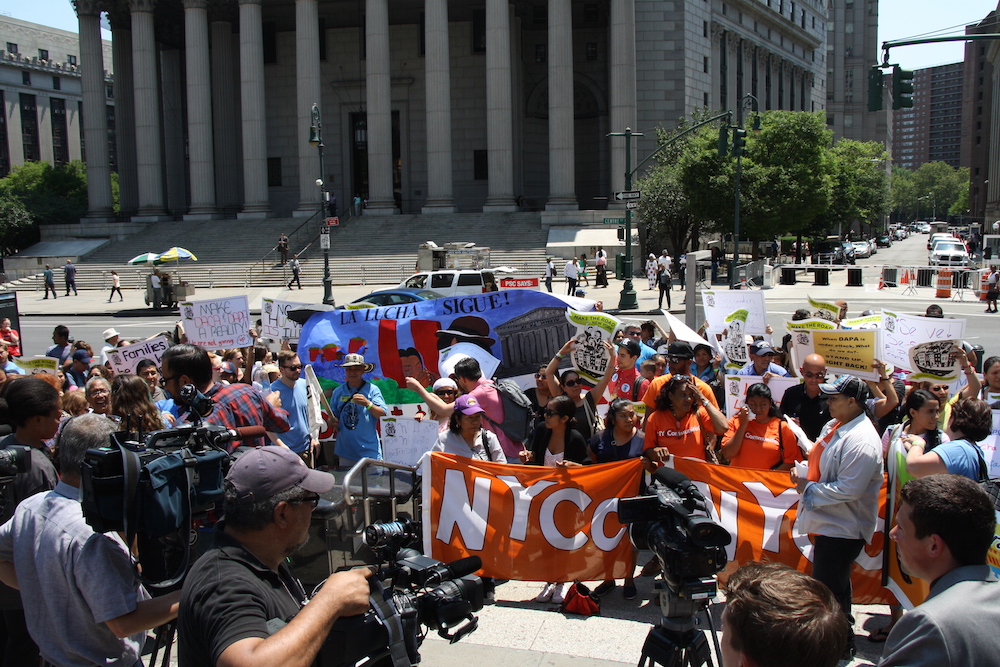 “Today we suffer, in November we vote,” dozens of protesters chanted in front of City Hall this afternoon. Some 40 people gathered to express dismay over yesterday’s Supreme Court deadlock over President Obama’s immigration plan, which would have given undocumented immigrants protection from deportation and the possibility to work in the United States. The rally was organized by the Bushwick chapter of Make the Road New York, a non-profit dedicated to representing the city’s Latino and immigrant communities.

President Obama’s executive action would have shielded over 5 million from deportation by introducing The Deferred Action for Parents of Americans and Lawful Permanent Residents (DAPA), which would have allowed the undocumented parents of American-born children to apply for work permits, and expanding the Deferred Action for Childhood Arrivals (DACA), which would have protected those who arrived in the U.S. before the age of 16 and stayed at least five years. For many participating in today’s rally, these measures would have been key to achieving a more secure legal status in the country. Many of those protesting were beneficiaries of DACA, and had hoped for the passing of DAPA to reunite families or keep them together.

Catalina Benitez, an immigrant from Mexico and a member of Make the Road, has been in the United States for over 20 years. She was attending the rally with her two-year-old son, Daniel, and said the Supreme Court’s deadlock came as a “great disappointment” to many. 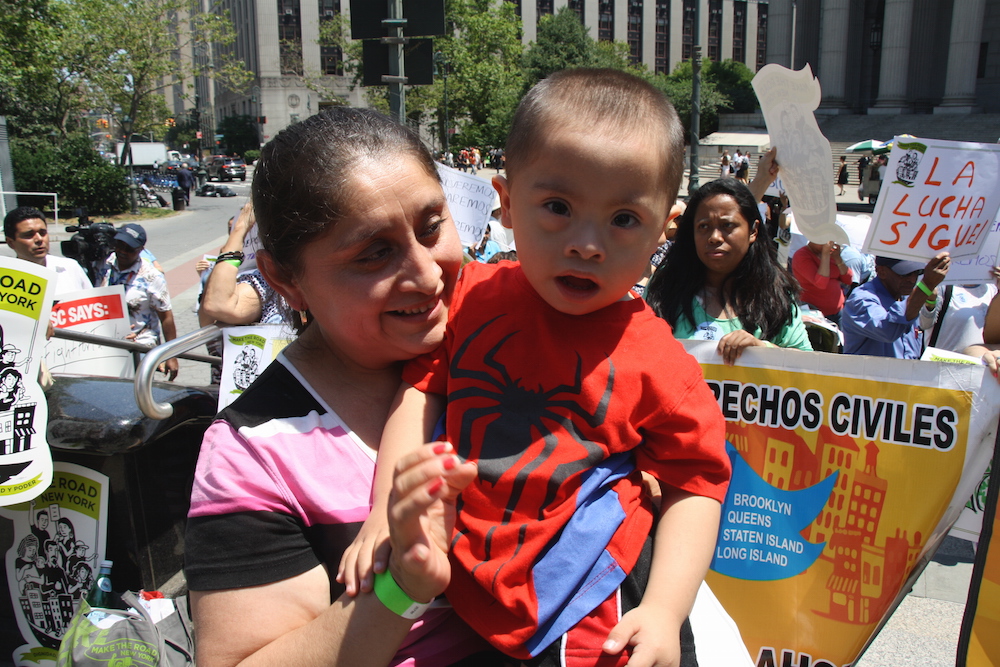 “We were hoping that we’d be given more options.” Benitez said in Spanish of Obama’s plan, and the limbo that’s left in the wake of the Supreme Court’s 4-4 tie. Benitez’s son, as well as her five-year-old daughter, have benefitted from DACA, but the aborted expansion of the plan has many families worried about their future.

Benitez, who lives in Williamsburg, isn’t eligible to vote in the upcoming presidential election, but she hopes that the rally will raise awareness and encourage people who can vote to support immigrant rights. “The citizens who can vote should vote for Hillary Clinton,” she said. 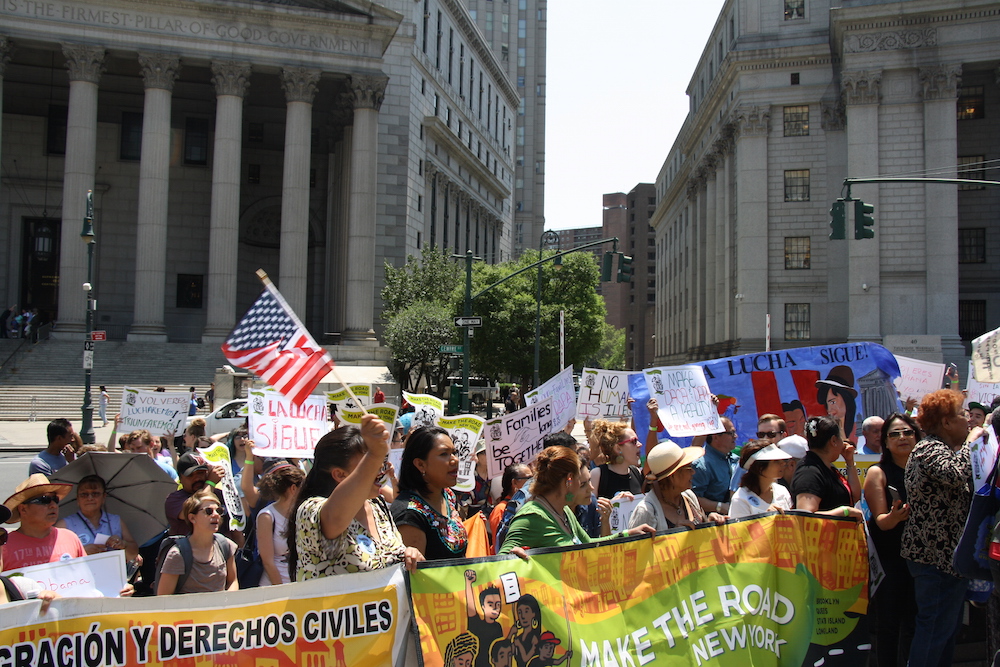 Petra Luna, a Bushwick volunteer who helps Make the Road with press statements, event organizations, and community outreach, expressed a similar disappointment in the SCOTUS deadlock. “Immigrants are a significant community in this country,” she said in Spanish. “We’ve helped raise the economy, and we have a life here.” 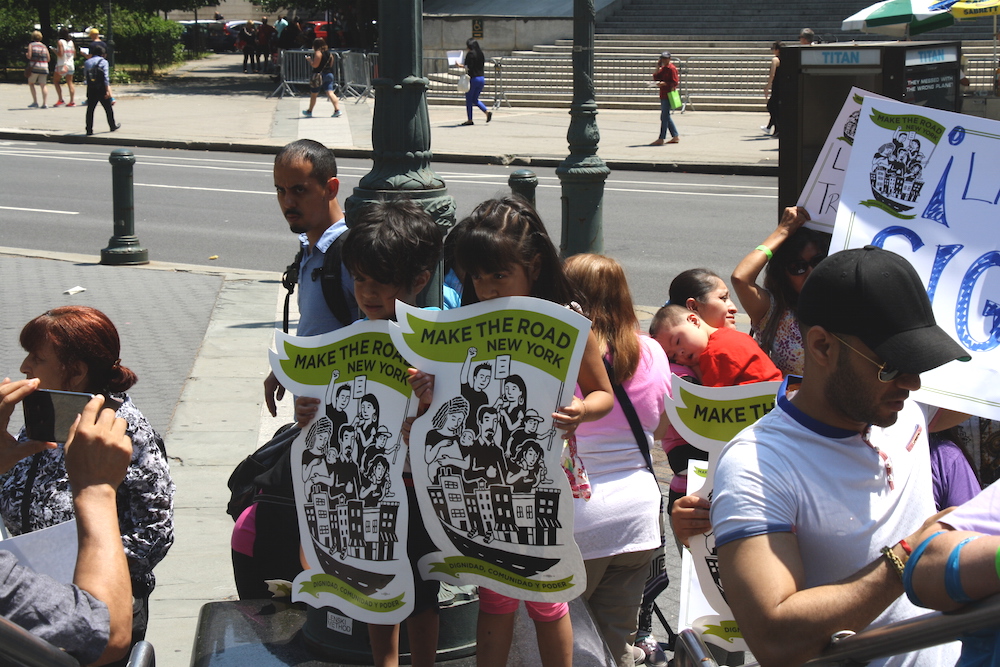 Luna said that Make the Road organized this rally to show U.S. politicians that they want their voice to be heard. “We want the deportations to stop, and we want to incentivize people to vote in November,” she emphasized. “We are all hoping for an opportunity, and we want to encourage those people who do have the vote to represent us.”

Other organizations present at the rally were the New York Civil Liberties Union, the Minkwon Center for Community Action, the New York Working Families Party, United We Dream, and the Center for Popular Democracy, to name a few. Individuals would periodically get in front of the crowd with a megaphone and speak of their frustrations with the gridlocked immigration reform.

“I’m angry, I’m fed up with the system,” Jung Rae Jang, a DACA beneficiary with the Minkwon Center, told the crowd. “We need to get the immigrant community to come together against this.”

Daniel Altschuler, the press representative for Make the Road, said that the majority of those in attendance at the rally today were from Bushwick, but immigrants living in Staten Island and Jackson Heights, Queens, were also well-represented. According to the organization’s website, over 35 percent of households in Bushwick are made up of foreign-born immigrants, three quarters of whom are from Latin America. A significant number of those immigrants are undocumented.

Luna expressed hope that, come November, people will decide to vote in favor of supporting immigrant communities. “We’re all going to the same heaven,” she reflected. But in the meantime, she said she’ll keep fighting to represent immigrant rights, and hopes people with electoral power in this country will do the same.

“I’m willing to give this everything I’ve got,” she said resolutely.